Net incomes for Illinois grain farms are projected to be lower this year than last. If this University of Illinois estimate holds, writes agricultural economist Gary Schnitkey on the farmdocdaily website, the weakening financial position of farms in the state will worsen. The last half decade has really changed the financial picture for farmers says Schnitkey, “So we had high incomes from 2010 to 2012 and every year since 2012 we’ve been on a downward trend through 2015. This is when we hit a $500 per farm average net income on Illinois grain farms enrolled in FBFM. This is very low and the lowest through the entire period we’ve examined. Obviously this is not enough to maintain the financial position of farms.”

Schnitkey evaluated FBFM net income records going back to 1996. FBFM stands for Farm Business Farm Management and is a record keeping service for farmers. The service has not yet summarized net incomes for 2016. However it is projecting a substantial rebound. 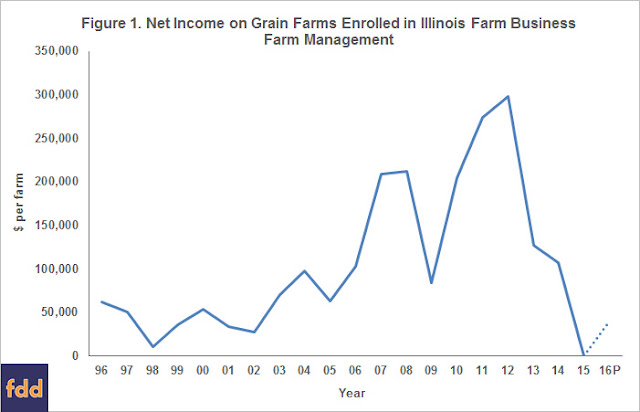 It appears net income for grain farms in the service will average somewhere between forty and fifty-thousand dollars. There are three primary reasons for this says Schnitkey, “What lead to it was higher than trend line yields. USDA estimates the statewide corn yield at 197 bushels per acre. Just three bushels off the record yield set in 2014 of 200 bushels. Soybean yields averaged 59 bushels. It is a record setting yield. Both of those record setting yields lead to higher incomes in 2016 along with very good ARC County payments.”

Those are two of the three factors leading to a better 2016. The high yields and sizable ARC County payments - that’s the farm safety net from Washington D.C. - aren’t likely to be repeated this season. The third factor very well could be repeated. It is lower input costs including cash rents and fertilizer. It won’t be enough thinks Schnitkey.


Quote Summary - For 2017 we used trend yields and commodity prices of $3.80 for corn and $9.90 for soybeans that resulted in lower incomes for the year. Probably something in the $20,000 range per farm.

Schnitkey cautions it is very early in the season, and that at this same time last year 2016 was projected to be a very, very bad year. It rebounded. It is also important to note that while higher than 2015 incomes, the projected 2016 incomes do not result in the building of financial reserves on most Illinois farms. Schnitkey believes most farms will continue to see the erosion of working capital, potentially leading to the need to refinance outstanding operating loan balances.
2017 farm grain Illinois income