Showing posts from April, 2019
Show all

Most people take for granted that the farmers can plant their crops way faster today than ever before. While it is true today’s equipment can plant a single acre of corn much faster, it still takes about the same amount of time to plant the whole crop.

It’s an illusion and pretty simple math says University of Illinois Agricultural Economist Scott Irwin, "This is a situation where your eyes can deceive you. So, you drive out in the countryside and you have a friend that is a farmer. They have a big planter and can plant their individual farm, in these particular cases, clearly much faster than they used to (be able to plant them). I don’t disagree with that individual anecdotal observation. The problem is that this doesn’t necessarily add up to the whole." 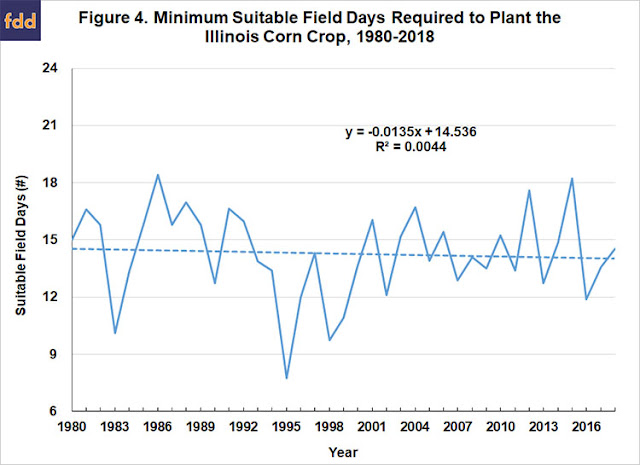 Sure, the equipment can get over a single acre way faster but each piece of equipment is going over way more acres than used to be the case. Consequently, it takes about the same time to plant the whole U.S. corn crop today as it did forty-years ago says Irwin, "It is a near constant, there is some variation from year to year, but on average it looks like it takes a minimum of 14 good field days to get the U.S. corn belt planted with basically everyone able to, and willing to, run flat-out."

In 1980, for instance, Illinois farmers were able to plant about one-million acres per day. Last year, running flat-out that figure was approximately the same.
Read more

Good Yields! Yes but a Warning | an interview with Gary Schnitkey

On a national basis, corn and soybean yields were near record-breaking levels in 2018, with exceptional yields in central Illinois and the eastern United States contributing heavily to those near-record U.S. yields. Other areas had below-trend yields. The county yields for corn and soybeans presented in this article illustrate these facts. Much higher U.S. yields are possible if all areas have exceptional yields. However, all areas including Illinois should not expect above-trend yields in every year.

The 2018 corn yield for the United States was 176.4 bushels per acre, just .2 bushels below the record yield of 176.6 bushels per acre set in 2017 (all yields in this article are from QuickStats, a website maintained by the National Agricultural Statistical Service). From a national standpoint, corn yields were excellent in 2018. 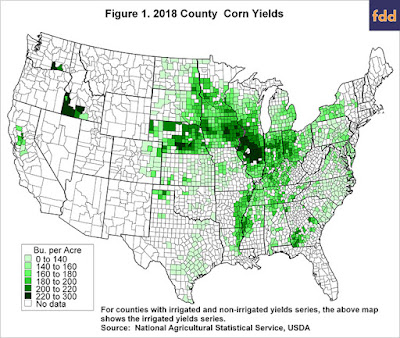 As would be expected, eastern Iowa and central Illinois had yields with positive yield deviations, with many counties having yield trends above 30 bushels per acre (see Figure 2). Note that yield deviations paint a broader area of excellent yields. That area includes southern Illinois, central and southern Indiana, western Ohio, western Kentucky, and parts of central Tennessee. 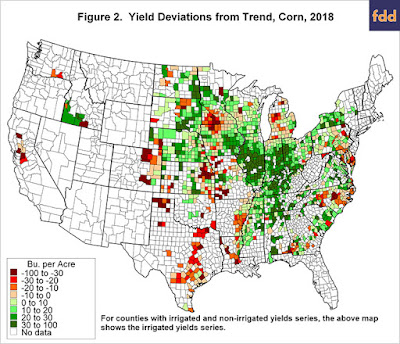 Other areas did not fare as well. Counties along the Iowa-Minnesota border had below-trend yields (see Figure 2). Other regions of poor yields in include Colorado, eastern Kansas and western Missouri, Texas, Arkansas and Louisiana, North Carolina, and New York.
Soybeans Yields Similar to corn, soybeans almost had a record-breaking yield. The average U.S. soybean yield for 2018 was 51.6 bushels per acre, .3 bushels below the record yield set in 2016 of 51.9 bushels per acre. 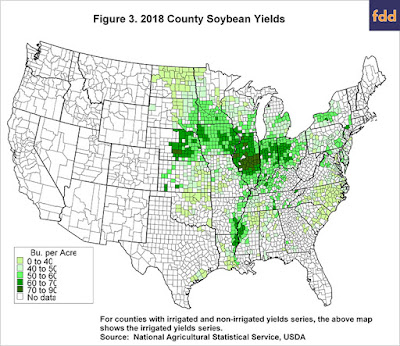 Yield deviations suggest that central and southern Illinois had exceptional growing conditions in 2018 (see Figure 4). Excellent growing conditions continued into Indiana, Ohio, Kentucky, and Tennessee. Other areas did not have as productive of a year. Yields were below trend along the Iowa-Minnesota board, North and South Dakota, Nebraska, Wisconsin, Michigan, Pennsylvania, and in North and South Dakota. 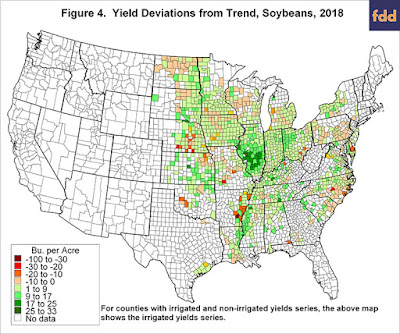 @Conab_Oficial reports Brazil's second-crop corn acreage is expected to be up 6.1% from last year. An early soybean harvest and good weather are the contributing factors. The 2nd crop corn harvest is expected to be 26.4% larger than last season's climate hampered crop. 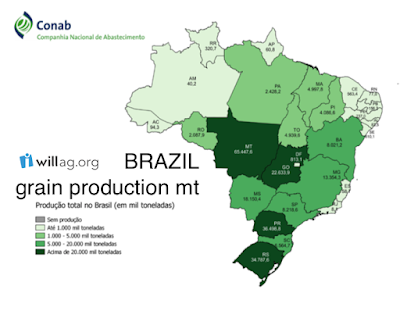 Brazil's 2018/19 ending stocks are expected to rise to 15.3mt or approximately a 2-month supply with total yearly demand at 93.5mt. @Conab_Oficial notes new crop corn supply may yet grow as production conditions are "very positive". Exports are set at 31mt. 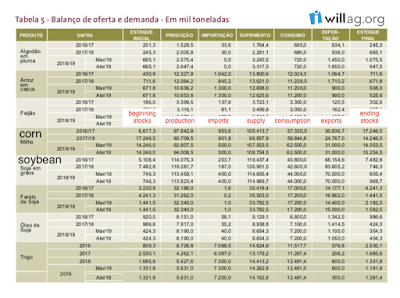 On price - @Conab_Oficial is concerned domestic usage will not increase because the 62.5mt already includes livestock feed usage that has levelled off and it is not known if domestic corn ethanol increases will materialize as new plants have yet to come online.

...a good part of the 1st crop corn writes @Conab_Oficial has not been marketed. When taken with a big second crop corn harvest it cautions a low price scenario.

Brazil's counterpart to USDA @Conab_Oficial notes early season conditions in the United States, should the over-abundant rainfall continue, could cause a switch to soybean acres here and a lower @CMEGroup futures price.
Read more


Friday’s USDA reports surprised the corn market. Todd Gleason has more on how more corn acreage than expected this year coupled with more corn leftover from last year than expected will influence prices.

March 1 corn stocks came in at 8.605 billion bushels compared to an average trade guess of 8.335 billion bushels. The stocks estimate suggested feed and residual use of corn during the first half of the 2018–19 marketing year came in eight percent lower than last marketing year. Lower feed and residual use materialized despite a sizable livestock herd and reduced production of distiller’s grains on weakening ethanol grind. A higher stocks estimate suggests the potential for underestimation of the 2018 crop size and supports the notion of declining demand for corn during the second quarter of the marketing year.

Corn producers reported intentions to plant 92.8 million acres of corn this year, 3.66 million more than planted last year. The reported corn acreage exceeded trade expectations by 1.4 million acres. The intention to increase corn acreage is widespread throughout the Corn Belt. Acreage is up 400,000 acres in Iowa, 200,000 in Illinois, and 150,000 in Indiana. Significant increases in corn acreage intentions showed up in the Northern Plains with North Dakota intending to plant 900,000 additional acres and South Dakota up 700,000 acres. Overall, the top ten corn producing states increased acreage by 2.05 million acres. If the intention to plant 92.8 million acres materializes, harvested acreage for grain may be close to 85.4 million acres. A U.S. average yield near 174.6 bushels per acre leads to a projection of production in 2019 of 14.9 billion bushels. Corn production at this level exceeds current marketing year use projections by 300,000 bushels. Corn use is expected to be higher in the 2019–20 marketing year, but the current implication of slowing use in the current marketing year and a larger crop next year is higher ending stocks.

The surprise in March 1 stocks and acreage created a bearish scenario for corn prices. The large corn stock number influences the consumption of corn in the feed and residual category directly during the current marketing year. An expectation of reduced feed and residual use is prudent moving forward. Without a resolution to the trade dispute, growth in ending stocks in both corn and soybeans appears feasible over the next year. Planting intentions confirmed the belief that farmers would switch to corn production in 2019. Depending on field conditions during the planting season and the changing price relationship between crops, the possibility of greater soybean acreage than reported in March exists. The June Acreage report will provide more clarification.
Read more
More posts