Showing posts from September, 2017
Show all

September 26, 2017
Friday the United States Department of Agriculture will close out last fall’s harvest and marketing year with the release of the fourth quarter Grain Stocks report. Todd Gleason reports it is not expected to impact the price of corn.
Read more

September 21, 2017
Farmers, business owners, and others on Medicare might find a bigger bill in the mail than expected. Todd Gleason has more on how big income years produce big Medicare premiums two years later.
Read more 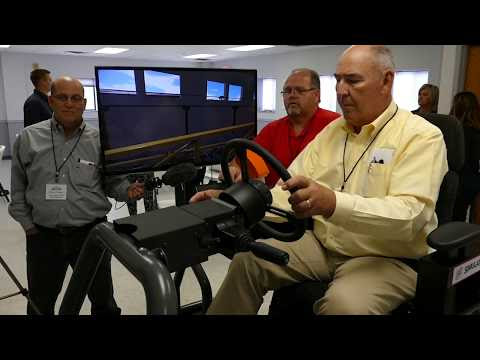 We often hear about pilots using simulators to train before they actually fly. As of this year Growmark FS is using a simulator to train its sprayer operators. This month the company invited reporters to its training center in Bloomington, Illinois and after a brief introduction invited them to take a spin in their brand new RoGator. Not a real one, but a simulator that seems pretty darned real even, says Growmark Equipment Manager Erik Wilcox, to those that drive the sprayer for a living. Wilcox - I’ve had a lot of doubting Thomases come in and say, “this is just a video game and not anything worthwhile” and with each and every one of them I challenge them to just get on and give me the feedback. Every one of them, and I mean every one of them and that’s been about a dozen that have gotten on with me as an expert, have come off and said, “yeah, we are headed in the right direction.” The simulator currently features road and field courses. It was created as a training module for FS Sy…
Read more

Corn and Soybean Production Outlook in 2017-18

September 18, 2017
Given the price reaction, the market remains uncertain about the USDA’s September forecast of 2017 corn and soybean production. Todd Gleason has more with the commodity markets specialist from the University of Illinois.
Read more 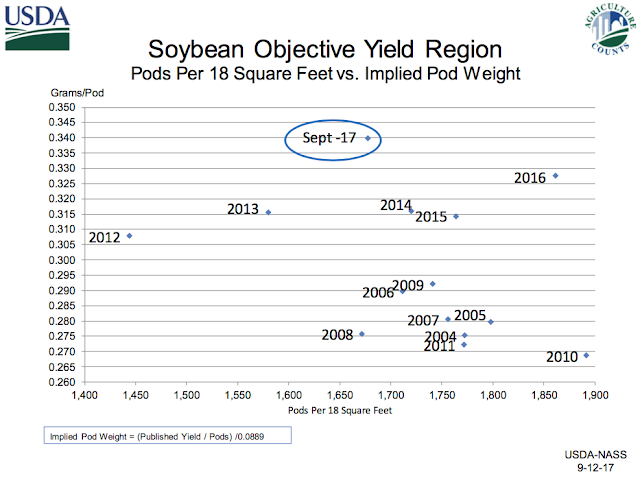 Tuesday’s USDA Crop Production report included a very heavy soybean pod weight. Todd Gleason talks with USDA NASS Chief of the Crops Branch about the weight, how it is calculated, and how it might change over time.

We will examine every point in this petition and its appearing and disappearing group of supporting exhibits, and over time will respond factually…
Read more

Storing Corn and Soybeans in 2017

September 06, 2017
The current price structure of corn and soybean futures markets indicate positive carry in both markets and raises the question of whether producers should make decisions about grain sales. The decision by producers to store corn or soybeans should be determined by the returns to storage.There will be a lot of corn around this fall. USDA projects about sixteen-and-half billion bushels when you add what’s leftover from last year to this year’s harvest. It is projecting about four-point-eight billion bushels of soybeans. That’s a lot of both crops, but University of Illinois agricultural economist Todd Hubbs isn’t worried about running out of space to store it. In fact, the market is urging farmers to go ahead and store both crops at the moment by pricing futures contracts for later in the year a bit higher than the nearby months. The difference is called the carry says Hubbs. Having said that, he says the carry probably doesn’t pay out for commercial storage like you would see for on-f…
Read more

Evidence Favors the South & East Tempering Poorer Corn Belt Yields
This map shows the August 2017 USDA Crop Production Report state by state corn yields. Rollover each state to reveal the yield. Darker green colors represent higher yields. The table gives more complete detail and breaks down the nation by region. Note the twelve corn belt states in the Midwest are expected to yield 8.4 bushels to the acre less this year than last. The southern states, while representing only about 1.5 billion bushels of the total expected 2017 production of 14.2 billion, show a year over year increase of nearly 14 bushels to the acre.

USDA will update the Crop Production and WASDE figures Tuesday September 12, 2017. This will be followed at the end of the month by the 4th quarter Grain Stocks report Friday September 29th. Naturally, you can see these numbers shortly after their release on our website at willag.org or by following Todd's twitter account.

September 04, 2017
This map shows the August 2017 USDA Crop Production Report state by state corn yields. Rollover each state to reveal the yield. Darker green colors represent higher yields. The table gives more complete detail and breaks down the nation by region. Note the twelve corn belt states in the Midwest are expected to yield 8.4 bushels to the acre less this year than last. The southern states, while representing only about 1.5 billion bushels of the total expected 2017 production of 14.2 billion show a year over year increase of nearly 14 bushels to the acre.
Read more

Interviews from the Farm Progress Show