Showing posts from April, 2016
Show all

April 29, 2016
This is the third year of a financial crunch on the farm. It follows on the heels of a series of tremendous seasons since 2006. The extra money, from then, is now starting to run out. The financial stress in the ag sector may really begin to show this fall if low commodity prices persist says the Director of the TIAA CREF Center for Farmland Research on the Univeristy of Illinois campus, Bruce Sherrick.Quote Summary - It is already affecting cash rents and land prices some. However, on a percentage basis not as much as the current cash prices (would suggest) for delivery within this year at least. Sherrick says a a couple of things have happened which explain this buffering. The last several years have been really quite good for agricultural incomes. So, farmers have pretty strong balance sheets. It is easier to weather a downturn, says Sherrick, after a few good years, than a bad year after a few bad years, “We are seeing, clearly, working capital crunches beginning to hit people. Th…
Read more

Ukraine has rather good prospects for strengthening the positions of domestic agricultural commodities on the world market, declared the Verkhovna Rada deputy, President of Ukrainian Agrarian Confederation, Leonid Kozachenko.

According to him, in order to hold up its status of agrarian superstate, Ukraine has to invest at least 70 bln USD in the agricultural industry, and enlarge the production volumes of foodstuffs.

Ukraine will consume nearly 20% of the produced commodities, and export the remaining volumes, which will significantly replenish the state budget. Ukraine requires nearly 10 years of consolidated and stable work for development of effective public policy, deregulation and fight against corruption, to achieve the reporting objective. Only in such case, in the future Ukraine can confidently reach the second position following the USA by exports of agricultural produ…
Read more

April 28, 2016
The ag economists at the University of Illinois have updated their work predicting the “New Era” long range cash prices for corn and soybeans. Seven years ago Darrel Good and University of Illinois colleague Scott Irwin predicted the average cash price for central Illinois corn and soybeans would be $4.60 and $11.20. It started with a simple idea. The last time the price of corn and soybeans had really changed was during the 1972/73 crop marketing year says Scott Irwin.Quote Summary - Right. The first era was a $1.28, the second era was $2.36. The price jumped about 90%. We took that as our starting point and then realized this magnitude of jump made some sense given the market and other modeling exercises. We decided it seemed a reasonable estimate and to go with them. The equivalent numbers now are $4.35 on corn and $10.44 on soybeans.As it turns out, those are pretty close to the actual national average monthly cash price over the first eight years of the new era. Corn has averaged…
Read more 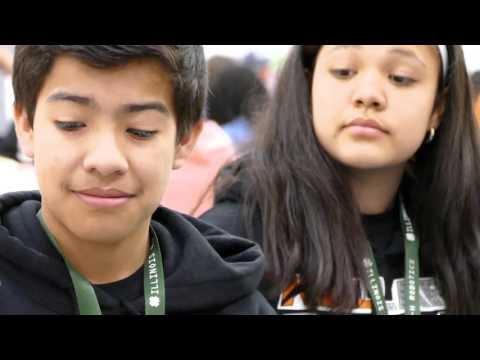 Did you know 4-H, that’s the world’s largest youth organization, is into robots. It is, and so are kids. Todd Gleason has more from an amazing robotics competition held in mid-April on the University of Illinois campus in Champaign, Illinois.
Read more

April 26, 2016
The price of soybeans have jumped in Chicago in part because of really wet weather in Argentina. That’s a done deal now says meteorologist Mark Russo of Riskpulse out of Chicago, Illinois.

Mark Russo follows agricultural growing conditions around the planet for Riskpulse. He made his comments during the Monday edition of the Closing Market Report from the University of Illinois, online at WILLAg.org.
Read more 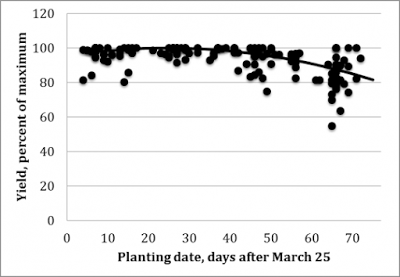 It looks like more rain is coming to the corn belt. That'll concern farmers hoping to plant this year's crop. However, they've got time says University of Illinois Extension Agronomist Emerson Nafziger.

There's not huge losses of yield as long as you can get corn planted by the second week of May - Emerson Nafziger, University of Illinois
The fact is Nafziger would rather wait than put a crop in the ground under not so great soil conditions, "I think it is easy at this time of year to do more harm than good by planting it when you say, " well I don't think this soil is quite ready, but I think we'll have to get started and go." And our goal is to get it planted when it is fit, and as soon as we can when it is fit".

Nafziger's planting date studies across the state of Illinois over the last nine years put the optimum planting date for corn at April 17th. Planting dates from April 5 to April 25 maximize corn yield within a two bushel ran…
Read more

April 21, 2016
Corn growers are concerned about the amount of fall-applied nitrogen that might have been lost through the winter and how this might change nitrogen management this spring.The first question that needs to be asked on nitrogen management is simple says University of Illinois Extension Agronomist Emerson Nafziger. You need to know how much nitrogen the crop will need, then how much is naturally available, and finally, how much should be applied. “Our best estimate, and this is a bit of a floppy number, is the crop will take up about a pound of nitrogen for each bushel it produces. About two-thirds of that is going to be in the grain and removed by harvest of the crop. The other third will be in the residue. Some of this will get back into the soil, some won’t”, says Emerson Nafziger.The amount of nitrogen needed then is about 1 pound for every bushel expected. If the expected yield is 200 bushels to the acre, then it will need 200 pounds of nitrogen. Pay attention to this part.Nafziger …
Read more

Soybeans, the Switch is On 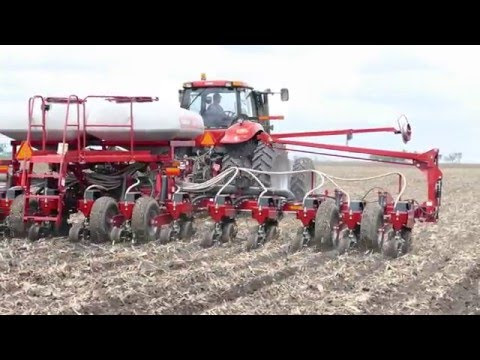 Ever since USDA released the Prospective Plantings report March 31st, many have been wondering if farmers will decide to switch a few corn acres to soybeans. The higher price of that crop seems to make this more likely.

Farmers told USDA in March they would plant about 82.2 million acres of soybeans this season. This is one percent less than last year, and a million acres or so less than the trade had really expected. Prices have rallied since then and University of Illinois Agricultural Economist Darrel Good thinks that million acres could be back in play, but that it won’t really change much, "I tend to think there will be some modest switching given the price reaction we’ve had since that report was released. Soybeans are considerably stronger than when the survey was done and corn prices are steady to weaker than when farmers were surveyed. I wouldn’t be surprised to see up to a million acres, perhaps, move away from corn to soybeans or perhaps some other crops. Again, a mill…
Read more

April 18, 2016
Each Monday afternoon during the growing season USDA releases the Planting Progress report. Todd Gleason files this report on how it is assessed by the trade; and how really it is summer weather that make the difference, not the pace of planting.
Read more

April 12, 2016
Univeristy of Illinois Extension Agronomist talks with Todd Gleason about the amount of nitrogen available to the corn plant during the growing season, how that fertilizer faired over the warm wet winter months, when to plant corn, and if it is ok to plant soybeans earlier than normal.
Read more

April 11, 2016
There are two trade negotiations under consideration in the United States at this time. We often hear about TPP, or the Trans Pacific Partnership. The other is called T-TIP. Todd Gleason has more on the European perspective of this contentious deal.
Read more
More posts