Showing posts with the label acres
Show all 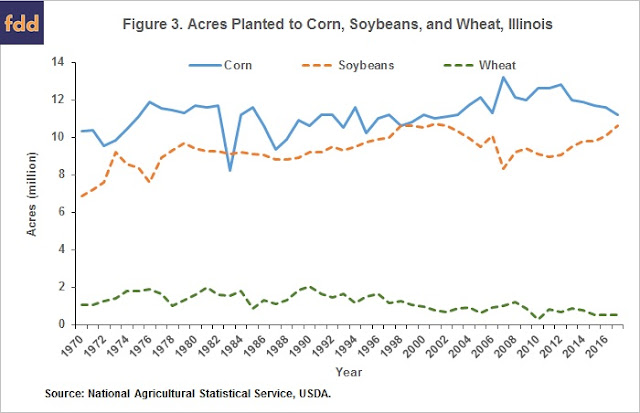 The time of year to develop corn balance sheet projections for the upcoming crop year is upon us. As we approach the halfway point of the 2016–17 marketing year, decision making regarding planting and new crop marketing get determined. The expectations for corn in the 2017 crop year put forth in this analysis show lower production leading to decreased ending stocks in 2017–18. The magnitude of reduced ending stocks provides important implications for corn prices moving through 2017–18.

Yield expectations typically use trend yield analysis to generate yield projections for the next crop year. National average corn yield came in above trend for the last three growing seasons and culminated in an estimated 174.6 bushels per acre in 2016. CBO projections place 2017 corn yield at 170 bushels per acre. USDA long-term baseline projections set 2017 yield at 170.8 bushels per acre. We find a linear trend of actual U.S. corn average yields from 1960 forward to be the best fit. The trend explains 89 percent of the annual variation in corn yields from 1960–2016. Weather conditions, as one would expect, impact yields. Bad weather reduces yield by more than good weather increases yield. Since this is the case, trend estimations can understate yield expectations in an average weather year. The trend estimate for 2017 is 166.8 bushels per acre. By adjusting the trend estimation for weather influences, we generate a national corn yield expectation of 169 bushels to use in this analysis. At this yield level, the 2017 crop projection is 14.1 billion bushels. By including the current projections for ending stocks by the USDA of 2.32 billion bushels with 50 million bushels of imported corn, the 2017 corn supply comes in at 16.4 billion bushels. The 2017 corn supply estimate is approximately 509 million bushels less than the current marketing year supply estimation.

Corn used for ethanol production will be impacted by EPA rulemaking related to implementing RFS mandates, gasoline consumption, and ethanol exports. An expectation of increased fuel ethanol requirements and slight increases in gasoline consumption with a positive ethanol trade balance provide support to the continued increase in corn used for ethanol. Corn used for ethanol expectations increase to 5.4 billion bushels in the 2017–18 marketing year. Other domestic uses for corn do not vary significantly from year to year. With a slight increase, other domestic use expectations provide 1.45 billion bushels of corn use.

The pace of corn consumption for feed likely will continue to show strength in the 2017–18 marketing year. Livestock production growth in many sectors provides support for corn feed use during this marketing year. Despite strong livestock production, several factors may limit corn feed use moving forward. The increase in ethanol production increases distiller’s grain availability. Increased availability of feed grains across the board may suppress some corn feed use. Residual use of corn could be reduced if the 2017 crop is smaller than the 2016 level. Feed and residual use might be near 5.5 billion bushels.

How to Read the FSA Acreage Dump

Wednesday (September 16, 2015) the Farm Service Agency released a new set of numbers. While these are preliminary figures of acreage and crops, they do offer a hint of things to come in future official USDA estimates.

First, it is really important to understand these numbers are raw and come with no explanation. They are simply a monthly dump of the aggregated acreage figures reported to the FSA by those participating in federal farm programs. Participation requires them to report the number of planted, failed, and prevented plant acres of each program crop. These numbers are updated by FSA from August to January. University of Illinois Agricultural Economist Darrel Good explains how the raw numbers make their way into the official USDA reports.

Quote Summary - NASS, the official estimator of major crops, basis their estimates on surveys of producers with the final estimated based on a very large agricultural survey in December, but they do use what they call administrative data, primarily this FSA data, to tweak their own estimates of planted acres. This is because theirs is based on a sample. They are not doing a census of acreage. Historically there has been a close relationship between the acreage reported to FSA an actual planted acres as reported by NASS. They use those numbers and so by definition they tend to come together at the end of the season.

Remember that’s not until January. So, it makes reading too much into the latest FSA numbers difficult, but it does offer what Darrel Good calls ‘hints’ as to what changes might be coming. USDA NASS will incorporate the FSA figures into the October 9 Crop Production report. However, that will be from an updated set of FSA figures that the public won’t actually see until October 14.

Quote Summary - At this juncture, I think there is a tendency to try and read too much into what the FSA reports are saying in terms of trying to anticipate how NASS is going to change final acreage. Having said that, we do see through September of this year that the difference between the estimated of planted areas by NASS (for soybean) and certified acres reported to FSA so far is a quite large margin. Whether it narrows considerably in October or not is the question. If it doesn’t then there is may be a bit of a clue there that NASS will have to lower its estimated of planted acres of soybeans this year. But again that is just a clue you are trying to read out of the data and we’ll see in October whether that happens or not.

Typically the FSA acreage for soybeans is 1.5 to 2 million acres lower than USDA’s final number. The current FSA figures are off by 4.6 million acres. The October 9 Crop Production report could change, but we won’t know exactly why or if it needs to change more until the FSA report is released five days later.

USDA has just wrapped up its survey of more than 80,000 U.S. farmers. The agency uses the information to develop the March 31st acreage forecast.

In the spring USDA’s National Agricultural Statistics Service division contacts farmers in hopes of learning how much of each crop they expect to plant. The agency contacts farmers across the United States. Corn and soybean farmers are of particular interest. This year more than 4000 Kansas farmers were tapped, along with around 3700 in Nebraska and about 3000 in each of the Dakotas, Iowa, and Illinois. Another 2000 farmers each were contacted in Indiana and Ohio.

Quote Summary - Our goal is to make sure we are measuring small, medium, and large farms. So, we use what’s called a stratified sample.

Quote Summary - That is a fancy way of saying for the biggest farms, we are going to talk to all of them; for the large, but not biggest we will talk with one out of three of those and for the medium, maybe one out of ten; and for the smaller farms we might measure one out of twenty-five of those.

Each farmer surveyed is asked how many acres they operate. How much of that land they intend to plant to corn or soybeans, and how much might already be in wheat. They’re also asked about oats, sorghum, and hay. The response rate goal, and usually achievement, is an amazing eighty percent.

Quote Summary - Yes, our goal is an 80% response rate on all surveys and we use several methods of data collection. Every producer in the sample receives a letter with a planting intentions questionnaire. The letter also has instructions for reporting to a secure internet website. These are both inexpensive ways of gathering data. The people that do not respond will be called. If this doesn’t work then someone will make a farm visit for a face to face. Both these methods are more effective, in general, but also are more expensive.

The biggest problem NASS faces when taking the acreage survey is that farmers usually haven’t yet made all their planting decisions. The agency knows this and is satisfied with best estimates. The individual reports are confidential by law and the data collected is exempt from legal processes.

The data can be aggregated at the county, state, and national level. Computers flag any large acreage changes at the individual level so that an analyst can check for a data entry error or make a follow up call. The state statisticians review the total number of crop acres for any major changes - total crop acres generally remain constant - and then submit the estimates in an encrypted file to USDA NASS in Washington, D.C. There more analysis is done and the final report is produced for release March 31.

If corn farmers want a break even price for their crop next year, they’ll need to plant fewer acres of it. Todd Gleason has more on how one ag economist has forward figured the number of corn acres needed in 2015 to push cash prices back above four dollars a bushels.
Read more
More posts