Showing posts from December, 2014
Show all

U.S. EPA has stalled the release of the annual usage mandates for bio fuels in the United States. These are due out each November, but neither the 2014 or 2015 figures have been released. EPA says it will put forth new numbers next spring. In the meantime, it might be important to consider just how using the default numbers would play out for the production of ethanol and biodiesel.

The United States congress set renewable fuels mandates a few years ago. It also gave U.S. EPA the power to adjust those mandates. EPA hasn’t done so for the 2014 calendar year, or for 2015. We’ll dispose of the political baggage and simply focus on the results of using the default statutes written into the law. 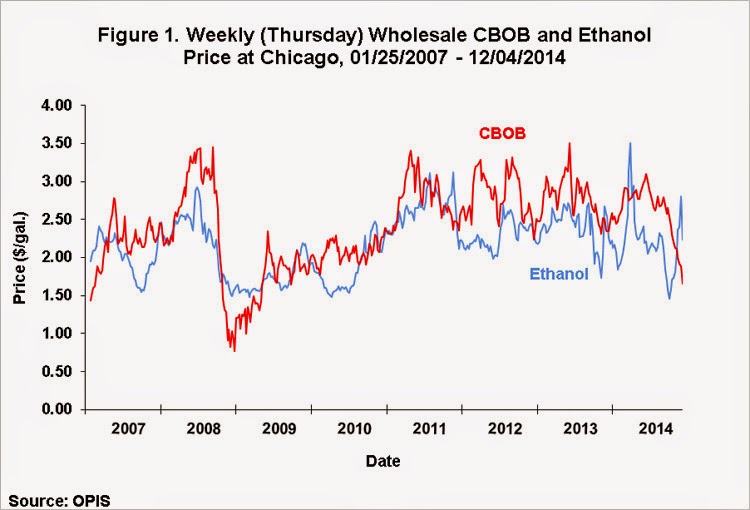 The magnitude of the decline in crude oil and gasoline prices has taken nearly everyone by surprise. NYMEX nearby crude oil futures this week touched $60 per barrel, almost $50 less than peak prices last summer. This is a major economic event with potentially far-reaching impacts for biofuels markets. We examined some of these impacts in two recent farmdoc daily articles (November 12, 2014; December 4, 2014). Our conclusion was that current high ethanol prices relative to gasoline prices, as illustrated in Figure 1, might slow the growth in domestic ethanol consumption, but would not likely result in consumption that is less than the 10 percent blend wall. In contrast, the high price ratio may represent a threat to

The Pace of Corn Consumption

Your browser does not support the audio element.

Now that the nation’s corn harvest is complete, traders have turned their full attention to the rate at which the crop is being used. Todd Gleason has more on the pace of corn consumption.
There are three primary uses for corn…

Each Tuesday during the Closing Market Report we talk with an energy analyst. This week Growmark's Harry Cooney turned his attention to OPEC, the dramatic drop in the price of a barrel of crude oil, and what to do about pricing 2015 fuel needs. You may listen to the conversation here.