Showing posts with the label Todd Hubbs
Show all 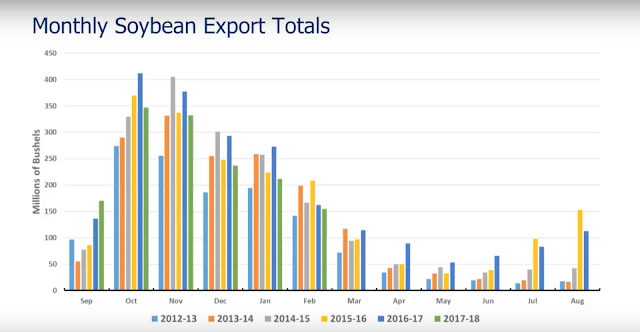 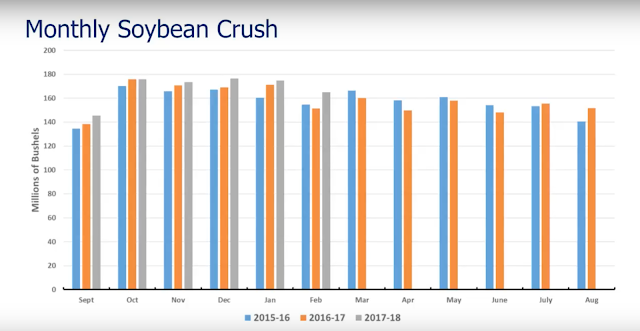 The potential for soybean crush levels to make up the difference for weak export totals is limited this marketing year. If the soybean export pace does not pick up substantially over the remainder of the marketing year, 2017–18 marketing year soybean ending stocks will increase. The current weather combined with trade policy issues make the soybean price susceptible to rapid changes as we move into planting season. A marketing plan for new crop soybeans should incorporate this information and provides pricing opportunities during near-term rallies.
Read more

Too Early to Worry About Late Planting

Farmers have been a bit worried about getting into the field because of rains throughout the Midwest. It looks like those will clear out for the week, mostly, and even if they don’t, there isn’t much to worry about, yet. Todd Gleason has more on when the ag economist at the University of Illinois think late planting impacts the markets and yields.

May corn futures’ prices tumbled to the lowest price level since December during the week ending March 24. Large crop estimates from around the world placed downward pressure on the corn market despite some positive domestic consumption numbers in exports and corn used for ethanol. Still, Todd Hubbs from the University of Illinois is hopeful there could be some support left in the corn market over time.

USDA, at the end of this month, will let us know how much of the nation’s soybean crop there is left in the bin. It “should” be a fairly uneventful number.

On March 31, the USDA will release the quarterly Grain Stocks report, with estimates of crop inventories as of March 1, and the annual Prospective Plantings report. For soybeans, the stocks estimate is typically overshadowed by the estimate of planting intentions. Usually, the quarterly stocks estimates for corn garners more interest because these reports reveal the pace of feed and residual use which is a large component of total corn consumption. The March 1 soybean stocks estimate this year may not provide much new information despite recent growth in marketing year ending stocks and concerns about the size of the South American crop… continue reading the full article by clicking here.

Generally, Todd Hubbs says it is pretty easy to figure out how many soybeans have been consumed. There is a regular reporting system for how many bushels are exported and one for how many are crushed. That second report, the crush, calculates how many soybeans are crushed in the United States into its two components. These are soybean meal and soybean oil. Hubbs, an agricultural economist at the University of Illinois, says the reports make it easy enough to calculate disappearance, consumption, usage, whatever you want to call, and consequently come up with a number that approximates how many bushels are left to use. Hubbs’ March 1 grain stocks figure for soybeans is 1.68 billion bushels. Here’s the math he used to get there.

Hubbs thinks that is a reasonable number. It depends, though, he says mostly on what happens in the export market through August.

Is it Time to Sell Some 2017 Soybeans

January 23, 2017 - Soybean prices increased dramatically over the week ending January 20 on reduced production estimates for the U.S. and increased uncertainty in the prospects for South American soybean production. Old crop soybean cash bid prices in central Illinois ended the week at approximately $10.40. New crop cash bid prices for harvest in central Illinois range between $9.90 and $9.94. The 2016–17 marketing year for soybeans, as it is currently shaping up, has a striking resemblance to 2015–16 marketing year expectations at this time last year. Despite the positive price outcome in 2016, a prudent soybean marketing plan for this year may possess some selling of 2017 soybeans in this price rally.

Currently, the WASDE report forecasts soybean crush and exports for the U.S. at 1.93 and 2.05 billion bushels respectively. At 420 million bushels, the ending stocks forecast is the largest since the 2006–07 marketing year. Projections of the U.S. 2016–17 marketing year average price place it in a range of $9.00 - $10.00, which positions current harvest cash bid prices in the upper end of this range. Many market observers believe a dramatic increase in soybean acreage will materialize in 2017. Estimates see the possibility of soybean acreage eclipsing corn acreage in 2017 due to the lower cost of production and large price differential currently in place with corn. The January 12 Winter Wheat Seedings report offered some support to this notion. Winter wheat plantings of 32.38 million acres are down 3.75 million acres from the previous year. This is the lowest level of winter wheat planting since 1909, and one could expect some of those acres switching to soybeans.

While possessing similarities to last marketing year, the possibility of a strong downward price movement through 2017 is substantial. Despite strong soybean demand and production issues in South America, the possibility of a large increase in soybean acreage planted and the continuation of excellent soybean yields hang over the rest of this year. The March 31 prospective plantings report will provide the next major indication for soybean acreage for 2017. With so much production uncertainty in the U.S. and South America over the next few months, the current bids for 2017 harvest delivery provide a pricing opportunity for locking in prices high in the expected marketing year average price forecast. If producers are considering increasing soybean acreage in 2017, the current prices offer an opportunity, at a minimum, to price soybeans on the expanded acreage.
Read more

Ethanol production in the United States ended the year on a record-setting note. It could mean an even bigger number for the corn-based fuel in 2017.

The U.S. ethanol industry ended 2016 on a high note. Ethanol production for the week ending Dec. 30 set a new ethanol production record with an average of 1.043 million barrels per day. The March futures price for corn moved higher last week to close at $3.58 in large part due to strength in the ethanol sector. Ethanol production and exports returned strong numbers over the first quarter of the marketing year. Currently, the World Agricultural Supply and Demand Estimates report forecast for corn consumption for ethanol production is 5.3 billion bushels. According to University of Illinois agricultural economist Todd Hubbs, when taking into account an increase in projected gasoline consumption in 2017 and robust ethanol export levels, the ability to surpass this projection is a strong possibility.

“Domestic ethanol consumption in 2017 will be influenced by domestic gasoline consumption, due to the ethanol blending requirement and the biofuels volume requirement associated with the Renewable Fuels Standard,” Hubbs says. “The EPA final rulemaking for the Renewable Fuels Standard for 2017 was released on Nov. 23 and is discussed in greater detail in the farmdoc daily article posted Nov. 30. In brief, the renewable fuels volume requirement is set at 19.28 billion gallons for 2017, which is up from the 18.11 billion gallons required in 2016.

U.S. retail gasoline prices averaged $2.14 per gallon in 2016, which is 12 percent less than the price experienced in 2015 and is the lowest price since 2004. The December Energy Information Agency Short Term Energy Outlook projected an increase in gasoline prices for 2017 to $2.30 per gallon. Despite the projection of higher gasoline prices, gasoline consumption is forecast at 143.60 billion gallons in 2017, which is up from the 142.72 billion gallons consumed in 2016. Ethanol production is forecast to be 1 million barrels per day.

“If the EIA projection is correct, approximately 15.3 billion gallons of ethanol will be produced in 2017,” Hubbs says. “When considering the robust ethanol export trade currently in process, the U.S. ethanol industry is expected to produce a record level of ethanol in 2017.”

Ethanol export numbers are available from U.S. Census trade data for 2016 through November. U.S. exports of ethanol thus far are at 948 million gallons, which is up almost 27 percent from the similar period in 2015.

According to Hubbs, for 2016, the prospect of ethanol exports exceeding 1 billion gallons is not unreasonable.

Canada, China, and Brazil imported approximately 67 percent of the ethanol shipped from the U.S. through November. “The increase in ethanol exports is driven largely by increased volumes sent to China and Brazil,” Hubbs says. “China imported 179 million gallons through November, which far exceeds the 73.8 million gallons imported during the entirety of 2015. Brazil imported 224 million gallons through November, which is almost double from 2015. As we progress into 2017, the increases are expected to persist in Brazil because high sugar prices are expected to decrease ethanol production as mills allocate cane for sugar production in 2017. There is concern that China could raise ethanol tariffs and reduce ethanol imports in 2017 due to a possible trade dispute with the new administration.”

Hubbs says the implications for corn consumption during the 2016–17 marketing year can be seen in the USDA Grain Crushing and Co-Product Production report released on Jan. 3. Grain crushing for fuel alcohol is available through November. For the first three months of the marketing year, 1.34 billion bushels of corn has been processed for ethanol. This is up 3.2 percent from 2015 processing numbers.

“Lower corn prices, strong ethanol exports, and greater blending requirements combine to make 2017 appear to be a strong year for corn consumption in ethanol production,” Hubbs concludes. “If the U.S. ethanol industry produced over 1 million barrels per day for the entire year, the ability to blend at requirement levels under an expanded gasoline consumption scenario and meet potential export market demand bodes well for corn use in the sector for 2017.”