Showing posts from October, 2016
Show all

via FarmDocDaily
by Gary Schnitkey, Agricultural Economist - University of Illinois

In recent years, soybean yields in Illinois have been exceptional, leading to questions on whether technologies have caused a "jump" in soybean yields. While the 2016 state yield will be an outlier, it is too early to say that a new regime of soybean yields exists. Relative to corn yields, soybean yields must increase more to have the same relative yields as in the early 1970s.

Comparisons to trend further illustrate how high recent yields have been in Illinois (see Figure 1). Fitting a linear trend through soybean yields results in an increase of .48 bushels per year. The 2014 through 2016 yields are significantly above the trend: 5.1 bushels in 2013, 4.6 bushels per acre in 2015, and 10.1 bushels per acre in 2016. The 2016 yield is a statistical outlier. Only one other yield has been 10 bushels away from the 1972-2016 trend, that being in the 1988 drought year when the actual yield was 11.5 bushels below trend 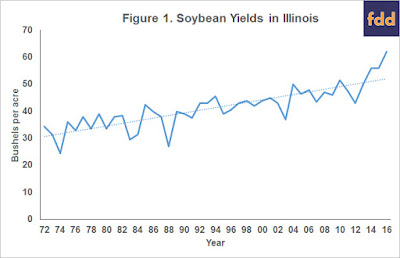 Why are Soybean Yields High?

Recent high soybean yields then lead to the question of what is causing the high yields. Have growing conditions been abnormally good in the past three years, leading to the high yields? Or has technology changed such that a higher yield should be expected in the future? Perhaps genetics have improved, or farmers' use of fungicides and other inputs have been leading to higher yields.

This question - is it good weather or technology changes - is difficult to answer from just observing time series of data. Two contradictory thoughts. Recent yields have been high, and the 2016 yield is a statistical outlier, suggesting technology changes. On the other hand, historical jumps in yields or trends have rarely occurred in the last 50 years. For example, corn yields appeared to be increasing at a faster after 1995 than before 1995. Belief in an increasing yield trend decreased after the poorer yields of 2010, 2011, and 2012. The recent high soybean yields in recent years may simply be a signal of exceptional growing conditions. 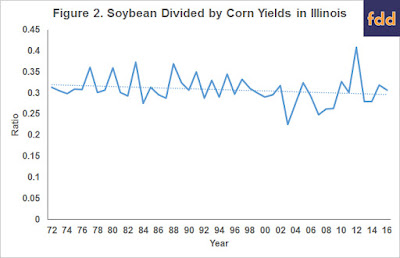 Over time, soybeans-to-corn yields have been trending downwards. An expected level of soybean-to-corn yields in 1972 was .32. The .31 value in 2016 is below the expectation in 1972. The Illinois state yield for 2016 is projected at 202 bushels per acre. For a .32 soybean-to-corn yield ratio to result in 2016, soybean yield would have to be 64.6 bushels, 2.6 bushels higher than currently projected.

Soybean yields in Illinois have been exceptional in recent years, with yields being much higher than trend yields. It is too early to say that a permanent change has occurred, and history suggests permanent changes occur rarely.
Read more

University of Illinois Agricultural Economist Darrel Good reviews the October 12, 2016 Crop Production and WASDE reports including his thoughts on how it changes off-farm storage decisions.

The United States Department of Agriculture has reported the size of this year’s soybean crop and for the second month in a row it has increased the size of what was already a record breaker. That trend is likely to continue.

USDA, in its October Crop Production report, raised the average national soybean yield by eight-tenths of a bushel. It now stands at 51.4 bushels to the acre and about 4.3 billion bushels strong. It is already a serious record breaker, but not likely big enough, yet, says University of Illinois Agricultural Economist Darrel Good.

Well, I think, taking all the evidence together, saying now that we got bigger in September, and we got bigger in October on soybeans, and the crop is already very big…I think would point to another small increase in the yield forecast in November and perhaps in January as well. So, maybe not by a lot, but I certainly wouldn’t expect the number to come down from what we are looking at right now. –Darrel Good

However, even in the face of a record crop, the price of soybeans has remained fairly strong. This tells Darrel Good farmers should be a little patient as they contemplate when to sell. It might be worth waiting to see how the South American crop unfolds. Although, the U of I number cruncher does have a few caveats.

If I had to choose to sell one or the other, I would still be a seller of soybeans. –Darrel Good

For reference USDA has established, this month, the expected mid-point national cash price received for soybeans by farmers from now until next fall at $9.05, with corn at $3.25 and wheat at $3.70.

You may read Darrel Good’s thoughts on the markets each Monday afternoon on the FarmDocDaily website.

The Harrington Seed Destructor is being tested by the University of Illinois for field level efficacy to control herbicide resistant weeds.

If you are looking for an easy way to release some of the stress in your life, you might think about taking a walk in a park or just buying some house plants.