Showing posts from February, 2016
Show all

Soybean farmers in ten states across the Midwest are being asked twenty questions. Todd Gleason has more on a Soybean Checkoff funded project to benchmark the yield impact of different production practices.

The price for corn has traded in a 25 cent range over the last two months. The price of soybeans has mostly traded within a 40 cent range. Todd Gleason explores this sideways pattern and how the pace of consumption has contributed the stable, if low, price structure.

The sideways price pattern reflects on-going expectations of adequate supplies of both crops writes Darrel Good on the FarmDocDaily website. He says there is plenty to meet consumption needs during the current marketing

Nearby corn futures remain above the early January lows, but continue to struggle under the weight of a number of negative market fundamental factors. Todd Gleason has more on the prospects for higher corn prices later this year.

Quadrac at the Chicago Auto Show


I stopped by the grain elevator in Elkhart, Illinois (pop. 403) yesterday. It was quiet. Elkhart Grain owns the...
Posted by Todd E. Gleason on Wednesday, February 17, 2016

Farmers around the nation are about to tap the birthplace of the internet browser for crop insurance data. Really! It’s a true statement. Todd Gleason has more from the University of Illinois.

Before Internet Explorer, Safari, Firefox, and Google’s Chrome, the first internet browser was called Mosaic. It was developed on the Univeristy of Illinois campus as part of the National Center for Supercomputing Applications. NCSA is one of the places the internet was born. Today it is home to Blue Waters one of the most powerful supercomputers on the planet. And as of this month NCSA is home to the data farmers will use to help them make decisions about crop insurance via the FarmDoc website says NCSA’s Scott Wilkin.


Quote Summary - The way it will work is as an interactive website. It will actually be running on the web servers sitting at NCSA. We take the data, somebody says we want to make this happen; we want to understand the costs and benefits for an Enterprise Unit in Pike County, or Piatt County, or Champaign County. It runs the numbers automatically. It does the calculations right then. So, it is very sustainable.

So big deal you might says, “The FarmDOC (farm-doc) site has been home to the default crop insurance tools farmers in twelve corn and soybean producing states have used for a longtime.” This is true, but those have been hand-updated through an enormous Excel spreadsheet. The realtime calculations are the key and the reason agricultural economist Bruce Sherrick says the FarmDOC team moved the data to NCSA.


Quote Summary - From my perspective, they may not agree, but I think it has been a blast to see how folks who think about that as a normal environment attack a problem like this. By most of the scales they are used to working at we are probably a very small problem. By the scale we are used to working at, this was a really large numeric problem. So to be able to turn it over to somebody that thinks, not in terms of… a few billions is not a large number to somebody used to working in a National Center for Supercomputing applications environment.

NCSA is handling the front and back end of the new crop insurance calculators found on the FarmDOC pages. Those calculators must handle large stress loads during the Crop Insurance decision making time from March 1 to March 15. The volume of users coupled with the volume of calculations all done in realtime is mind boggling no more. NCSA will do the heavy lifting to help farmers quickly evaluate their federal crop insurance options. 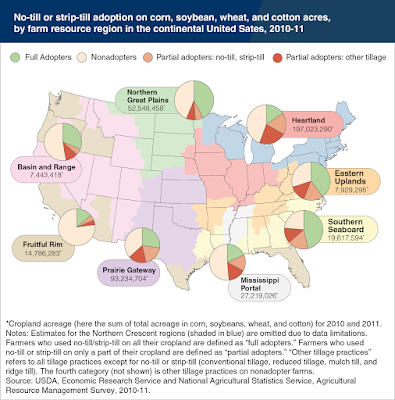 No-till and strip-till are two of many tillage methods farmers use to plant crops. In a no-till system, farmers plant directly into the undisturbed residue of the previous crop without tillage, except for nutrient injection; in a strip-till system, only a narrow strip is tilled where row crops are planted. These tillage practices contribute to improving soil health, and reduce net greenhouse gas emissions. During 2010-11, about 23 percent of land in corn, cotton, soybeans, and wheat was on a farm where no-till/strip-till was used on every acre (full adopters). Another 33 percent of acreage in these crops was located on farms where a mix of no-till, strip-till, and other tillage practices were used on only some acres (partial adopters). In the Prairie Gateway, Northern Great Plains, and Heartland regions—which account for 72 percent of corn, soybean, wheat, and cotton acreage—more than half of these crop acres were on farms that used no-till/strip-till to some extent. Partial adopters have the equipment and expertise, at least for some crops, to use no-till/strip-till; these farmers may be well positioned to expand these practices to a larger share of cropland acreage. This chart is from the ERS report, Conservation-Practice Adoption Rates Vary Widely by Crop and Region, December 2015.
Read more
More posts