Showing posts with the label projections
Show all

Projected Net Incomes on Illinois Grain Farms in 2019 and 2020

Due to lower corn and soybean yields, 2019 net farm incomes on Illinois grain farms are projected to decline more than $80,000 per farm from 2018 levels. The low yields are partially offset by higher corn and soybean prices and higher MFP payments in 2019 as compared to 2018. Incomes in 2020 are projected to be negative if yields are at trend levels and Market Facilitation Program (MFP) payments do not occur.

Historic Net Incomes on Illinois Grain Farms
Figure 1 shows average yearly net incomes on grain farms enrolled in Illinois Farm Business Farm Management (FBFM). These net incomes are averages across all grain farms in Illinois. Size, tenure relationships, and financial structures vary across these farms. Many farms are below 1,000 tillable acres, and some farms have over 8,000 acres. Over time, the size of farms has grown. In 2018, the average number of tillable acres was around 1,500 acres. 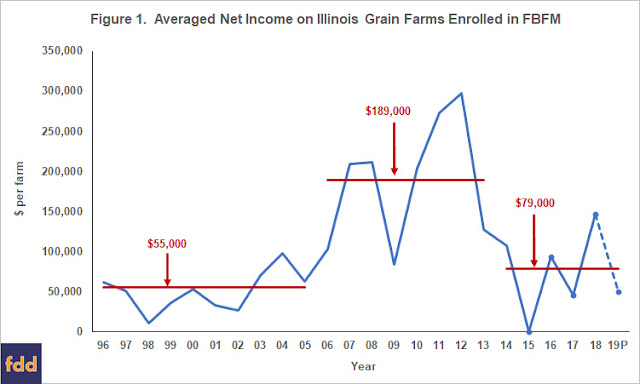 As can be seen in Figure 1, there are three distinct periods of net income. Between 1996 and 2005, net income averaged $55,000 per farm. This period was characterized by relatively low corn and soybean prices, resulting in low incomes. Income during this period reached a low of $11,000 in 1998, a year in which government programs were instituted to provide price and income support to grain farms.

From 2006 to 2013, incomes were much higher, averaging $189,000 per farm. Corn and soybean prices were higher than the other two periods due to increased use of corn in ethanol production, growing export demand for soybeans, and yield shortfalls occurring in several years. The prime example of a yield shortfall was 2012, a year of intense drought over much of the eastern and lower corn-belt. While yields were low in 2012, corn and soybean prices reach all-time highs. High prices, along with proceeds from crop insurance products, resulted in a record income of $298,000 per farm.

Compared to 2013 through 2017, incomes were much higher in 2018. In 2018, soybean prices fell partially due to U.S. trade disputes with China and other countries. In 2018, central Illinois farms on high-productivity farmland averaged $8.85 per bushel of soybeans, down from the $9.81 per bushel average from 2014 to 2018 (see Table 1). Two factors countered this price decline resulting in higher 2018 incomes: 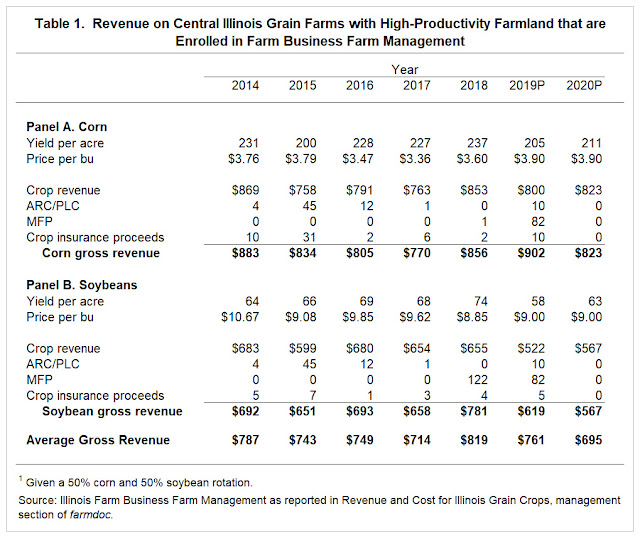 Projected 2019 Incomes
The average net income in Illinois will be below $60,000 per farm, much lower than in 2018, with possibilities for incomes approaching 2015 levels on many farms. Most of the decline in net income is associated with lower gross revenue, as opposed to a significant change in expenses. On central Illinois high-productivity farmland, gross revenue averaged $819 per acre in 2018, given that 50% of the acres were in corn and 50% were in soybeans (see Table 1). Average gross revenue is projected at $761 per acre in 2019, $58 lower than in 2018. Factors impacting revenue from 2018 to 2019 are:
The $58 per acre decline in gross revenue from 2018 results in a net income that is $87,000 lower per farm ($58 per acre times 1,500 acres) in 2019. This leads to an estimate of net income for central Illinois farms of $60,000 ($147,000 income in 2018 minus $87,000 less income). Central Illinois likely will have some of the highest yields in the state, and therefore higher incomes than other areas. In northern Illinois, for example, yields are projected at 185 bushels per acre for corn, resulting in much lower income projections for northern Illinois. As a result, average incomes on Illinois farms likely will be below $50,000 per farm when averaged across Illinois.

Projected 2020 Incomes
Current projections would place revenue lower in 2020 as compared to 2019. In central Illinois, for example, average gross revenue is projected at $695 per acre in 2020, a decrease of $66 per acre from 2019 projected levels of $761 per acre (see Table 1). These projections are based on:
These values would result in a negative average net income for 2020. Many factors could result in higher incomes, with two of the more likely factors being:
Summary
Lower yields will contribute too much lower incomes on Illinois grain farms in 2019. A continuation of low incomes is projected into 2020. Without a continuation of the MFP program in 2020, incomes on Illinois farms will be negative if prices do not increase given that trend yields occur.
Soybean prices have fallen since the trade dispute began in 2018. Currently, soybean prices are near $9.00. Note that this $9 price results with considerably lower soybean acres in 2019, and much lower yields. In the current supply and demand environment, a return to more normal acres and above-trend yields likely would push prices below $9.00 per bushel. Farmers have not felt the full impact of lower prices because MFP payments have supported income in 2018 and 2019. If prices do not increase or yields are not exceptional, farms may have negative incomes without MFP payments in 2020.

Acknowledgements
The author would like to acknowledge that data used in this study comes from the local Farm Business Farm Management (FBFM) Associations across the State of Illinois. Without their cooperation, information as comprehensive and accurate as this would not be available for educational purposes. FBFM, which consists of 5,500 plus farmers and 60 professional field staff, is a not-for-profit organization available to all farm operators in Illinois. FBFM field staff provide on-farm counsel along with recordkeeping, farm financial management, business entity planning and income tax management. For more information, please contact the State FBFM Office located at the University of Illinois Department of Agricultural and Consumer Economics at 217–333–5511 or visit the FBFM website at www.fbfm.org.
Read more

China purchases two-thirds of the soybeans traded on the planet.

Over the next ten years, USDA expects global soybean trade to increase by 25% and that Chinese purchases will account for 85% of the increase. The numbers were presented at the Agricultural Outlook Forum in Washington D.C., (today, Thursday, Feb 23, 2017) by USDA Chief Economist Rob Johannson. He says the projections are based on the assumption the number of middle-class households in China will double to nearly 250 million by the year 2024, “Those households will start demanding more meat, protein, and processed foods in their diet. And looking to other potential markets that could provide significant new demands for food commodities, we note that the number of middle-class households in India is expected to triple by 2024.”

Johannson says the United States has not had nearly as much success in opening new markets in India as it has in China. He thinks poultry, eggs, fruit, and milk have the greatest potential. The estimated annual growth in poultry meat, he explains, could exceed eight percent. That kind of livestock trade across the planet the Chief Economist explains will require grain and oilseed farmers to expand acreage, "Based on projected yield growth, the world will need to allocate about 50 million more acres of corn, wheat, and soybeans at U.S. productivity growth levels to meet the increase in trade demand.