Showing posts from December, 2015
Show all

Dow and DuPont today announced the two companies would combine in a merger of equals. DowDuPont, the merged business, will then be split into three independent publicly traded companies; agriculture, material science, and speciality products.

Most current shareholders will each own approximately 50 percent of the combined company.

Listen to the closing comments from Ed Breen and Andrew Liveris from the Friday December 10, 2015 Dow Dupont merger announcement.

U of I Extension Food Safety Training for School Lunch Program

The Illinois State Board of Education has awarded four and half million dollars to University of Illinois Extension. The money will be used to help with the state’s school lunch program. The Board will use Extension to provide foodservice training and education to about 4000 school lunchrooms. Family & Consumer Sciences educators will create and deliver training on child nutrition standards and the cafeteria environment. The $4.5 million, three year effort starts in January with a monthly webinar series. A web training portal will follow in March. Schools interested in training can also contact Extension for onsite customized sessions and technical assistance says University of Illinois’ Jennifer McCaffrey.

This is the 30th anniversary of the CRP. It’s a federal program that assists agricultural producers with the cost of restoring, enhancing and protecting certain grasses, shrubs and trees to improve water quality, prevent soil erosion and reduce loss of wildlife habitat.

As of September 2015, 24.2 million acres were enrolled in CRP. CRP also is protecting more than 170,000 stream miles with riparian forest and grass buffers. That’s enough to go around the world 7 times.

The U.S. Secretary of Agriculture calls CRP one of the most successful conservation programs in the nation’s history saying it has helped farmers, ranchers, conservationists, hunters, fishermen and other outdoor enthusiasts to set aside lands that otherwise might be put into production agriculture.

USDA, for its part, suggests when commodity prices are low, enrolling sensitive, low-quality and marginal lands in CRP can be especially attractive to farmers and ranchers, as it softens the economic hardship for landowners at the same time that it provides ecological benefits.

Contracts on 1.64 million acres of CRP are set to expire on Sept. 30, 2016. Producers with expiring contracts or producers with environmentally sensitive land are encouraged to evaluate their options under CRP. The current enrollment period closes in February.

Let’s start by building a corn for ethanol baseline to see why. The EIA, the U.S. Energy Information Administration, says U.S. production of fuel ethanol in 2014 totaled 14 billion 313 million gallons. That was about a billion gallons more than in 2013, and nearly 400 million gallons more than the record setting year of 2011. So, 14.313 billion gallons of ethanol were produced in 2014. During the first nine months of this year, writes Darrel Good on the Farm Doc Daily website, EIA shows production 3.6 percent larger than during the same 9 months last year. It appears October and November were on that same track, and while December looks to be off a bit, it should leave the yearly consumption at a whooping and record setting 14.745 billion gallons says U of I’s Good.

Quote Summary - Production at that level will require about 5.25 billion bushels of feedstock, mostly corn, for conventional ethanol production in 2015.

So the baseline is big, but let’s start back figuring for 2016 corn usage to make ethanol. U.S. EPA just released biofuels volumes for 2016. Those standards point to conventional ethanol consumption of 14.5 billion gallons for 2016. It’s about a 500 million gallon year-to-year increase says Good, however there is a second related factor. That factor is the blend wall, or how much gasoline is actually consumed in the United States .

Now, since some gasoline is consumed without ethanol and some with higher ethanol blends, the effective E–10 blend wall is actually thought to be 9.9 percent of consumption or 13.856 billion gallons. Here’s the back figure. Subtract from this number imported ethanol, add in a few additional E85 gallons, and total 2016 consumption of conventional ethanol says Darrel Good is not roughly 500 million gallons more than this year, but rather about the same as this year - though that 500 million gallon gap will still have to be filled.

This outcome is very different from the initial reaction that an increase in the implied conventional ethanol requirement from the preliminary to final rule making for 2016 of 500 million gallons would result in a measurable increase in feedstock - corn - consumption.

Since the 1960’s farmers have been using herbicides to control weeds. Frankly, herbicide formulations haven’t changed that much and the weeds have managed to find ways to adapt. Todd Gleason has this four step plan from the Univesity of Illinois to control them in corn or soybeans.

Some weeds have become resistant to the herbicides farmers use to control them. Others have lengthened their germination period, emerging later in the season, avoiding early spring control methods. University of Illinois Extension Weed Scientist Aaron Hager has a four step plan farmers can use to maintain a competitive edge in corn or soybeans. It starts by planting into a weed free seedbed.

Quote Summary - It is easy to achieve a weed free seedbed by either replant tillage, burndown herbicide or a combination of those two. Given the challenges of weather and of resistant populations it is advisable not to plant into existing weed populations or any green vegetation without adequate control ahead of time.

Step two in the plan is to select an appropriate residual herbicide. Be sure it provides very good control of the most problematic weed species in a given field. Pay attention to the label, says Hager, and always apply the recommended rate for the spectrum of weeds in the field.

> Quote Summary - The third step is to make timely post emergence applications. Base those on just not the number of calendar days after planting, but rather base those post decision on adequate scouting. So, return to the fields about two weeks after crop emergence. Scout the fields and determine the weed size, crop development stage and make the decision on a timely application of a post herbicide.

The final and fourth step is to go back to the field seven to ten days later and evaluate how well the post emergence herbicide application worked. It may be that another germination of a weed species warrants a second application. This won’t be know without a return trip.

If we fail to go back and look at how well the product performed, or the level of crop injury we see soon after that application, we could have some very significant challenges later in the growing season.

The days of set-it-and-forget weed control have ended. Todays farmers must scout fields for competitive weeds before during and after the growing season.

The United States Environmental Protection Agency is beginning to comply with the letter of the law as it pertains to biofuels. Todd Gleason reports this could be a boon for biodiesel made from soybeans.

EPA this week announced it would force oil companies to find more ways to use renewable fuels. This is something the oil industry has resisted saying it was too difficult to use much more than the ten percent ethanol blend already found in gasoline. This is called the blend wall and is actually less than the total number of gallons of renewable fuels congress mandated be used in 2016 when it originally wrote the law.

Since not all cars can burn greater than 10 percent ethanol in gasoline, and the amount of gasoline used in the United States is less than the renewable fuels mandate required by law, there is a renewable fuels gap left…something like a billion and half gallons. EPA hasn’t moved to force oil companies, yet, to find a new ways to fill that whole gap, but it closed it up big time and that’ll leave companies scrambling says University of Illinois Agricultural Economist Scott Irwin.

Quote Summary - And so, the really interesting question is what will fill the gap. Will it be higher ethanol blends, E15 or E85 or biodiesel.

There’s an easy answer to this question says Irwin.

Quote Summary - At least for the next couple of years, biodiesel. Soybean oil prices since the low last August are up 25% and soybean prices are up just 3%. And meal has tanked over that same time period. One way or another it is beneficial to ag. Either I’m wrong and you get more ethanol in the form of E85 or you get more biodiesel with soybean oil and other animal fats.

The market is and has been for sometime forecasting the next winner in the biofuels industry and it appears at this point to be biodiesel made mostly from the soybean.

Farmers and their bankers can get a jump on just how much income to expect from the ARC County program next fall. Todd Gleason has more on how NASS county yields can be used to anticipate the payments.

Farm income is down dramatically. It means farmers will be going to bankers for production loans this winter. Those loans will be used to plant next season’s crops. The bankers will be looking for every clue they can to help them make solid lending decisions. One source of income they’ll want to calculate comes from the farm programs. However, the ARC County payments won’t be figured until the fall. 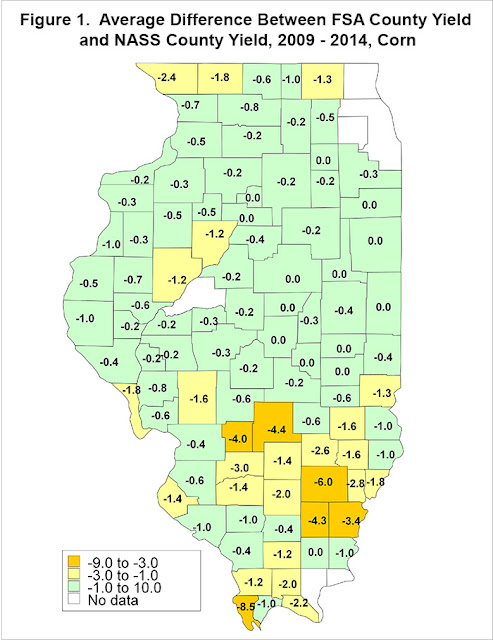 NASS county yields do vary from the FSA numbers, but not by much. NASS calculates yields by dividing production by harvested acres. These are both numbers the agency collects via a statistical estimate. FSA uses a different calculation. FSA adds to acres the RMA failed acres. Therefore, FSA yields will most always be less than NASS yields. NASS county yields, then, will provide a conservative estimate of the ARC County payment.
Read more

Monday the United States Environmental Protection Agency put forward the rules mandating how much of each type of renewable energy can be used in the nation’s liquid fuel supply. Just a few minutes after the announcement Todd Gleason spoke with University of Illinois Agricultural Economist Scott Irwin about the new numbers.

Scott Irwin believes the U.S. EPA in this rule making is moving swiftly towards the congressional mandated volumes for ethanol and other renewable fuels.