Showing posts with the label Xi
Show all

The agricultural sector is caught up in a storm of change. Political and economic forces have been squeezing trade on the global front and U.S. farmers have been leaning into the winds. We take up a few of these topics in this edition of the WILLAg Newsletter.
We’ll also explore these topics, marketing prospects, the price of farmland, and the weather during our March 5 All Day Ag Outlook. Hopefully, you can join us at the Beef House in Covington, Indiana. The cost is just $30 and includes Beef House coffee and rolls in the morning and Beef House lunch at the noon hour. 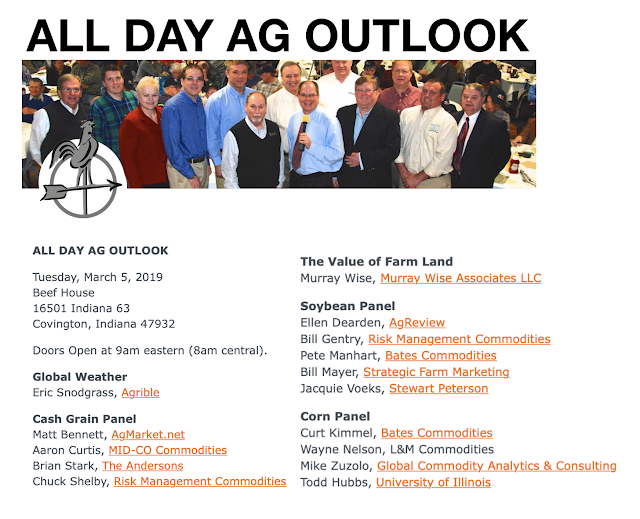 Friday the Chinese trade delegation gathered in the Oval Office with President Trump. A letter from President Xi was read out loud. It urged a continued push toward a final trade deal. The only firm detail to come out of the week’s worth of talks in Washington was a commitment to purchase 10mmt of soybeans. USDA issued an official release on the announcement. It did not include a timeline for the purchases. CNBC reported the Chinese had offered to guarantee purchases of $1.2 trillion dollars of U.S. goods. Again, there was no timeline issued and this point has not been confirmed by any other outlet, the White House, or the Chinese.

During the week the trade discussions in Washington, D.C. pointed to five MOU’s. These Memorandums of Understanding included one on agriculture and were how U.S. Trade Representative Robert Lighthizer had decided to break down the issues in order to tackle them; agriculture, non-tariff barriers, services, technology transfer & intellectual property.

President Trump during the Oval Office meeting Friday pushed aside the MOU’s. He interrupted Trade Representative Lighthizer in front of the Chinese. Lighthizer was trying to explain how the MOUs would build the foundation of a trade deal. Mr. Trump stopped him and said, “I disagree. I think that a memorandum of understanding is not a contract to the extent that we want.” Lighthizer agreed that the term MOU would not be used again.

The important point in this exchange is likely not the MOU discussion. The President interrupted and corrected his lead trade negotiator in front of the Chinese delegation. Clearly, if a trade deal is to be struck it can only be done one-on-one between Presidents Trump and Xi. They may meet next month at Mar-A-Lago.

Mr. Trump has long focused on closing the trade gap with China. The other issues have not been of very much importance to him although he does mention China stealing and intellectual property rights. A trade deal with China is one of the President’s campaign promises. The dazzling $1.2 trillion number CNBC reported might be very enticing to a man who has had a habit of fulfilling his campaign promises.

If it is completed in this fashion, without enforcement mechanisms or real intellectual property rights protections, then as President Trump has said recently Democrats won’t go along. Republicans are likely to stay mum as the deal sets idle in Congress and simply becomes a presidential election year rallying cry. Presidents negotiate trade deals. Congress approves them.

NPR profiled Trade Representative Lighthizer this week. Please take six minutes to listen. It’ll be worth your while to know a whole lot more about the man leading the trade negotiations with China.

This week USDA put on its 95th Annual Agricultural Outlook Forum. It provides some initial numbers the trade uses to project the 2019 growing season into the markets until official USDA reports are issued. The first supply and demand report for the 2019/20 growing season will be issued in May. The March 29 Prospective Plantings report will provide survey results of what farmers think their acreage mix will look like this year. Here you will find some of the powerpoint slides U.S.D.A. Chief Economist Robert Johansson presented in the opening session and the full supply and demand tables presented Friday morning.


You may watch the full opening session of the 2019 USDA Agricultural Outlook Forum. It took place in Washington, D.C. February 21 and 22. 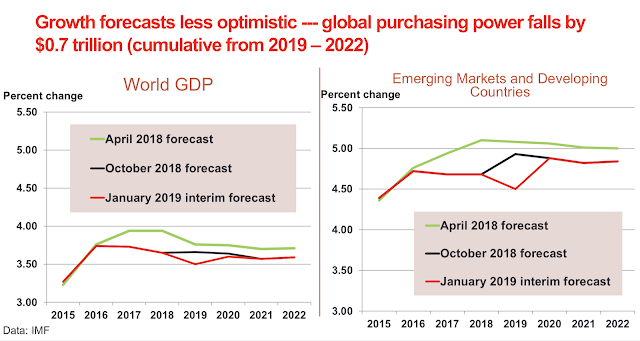 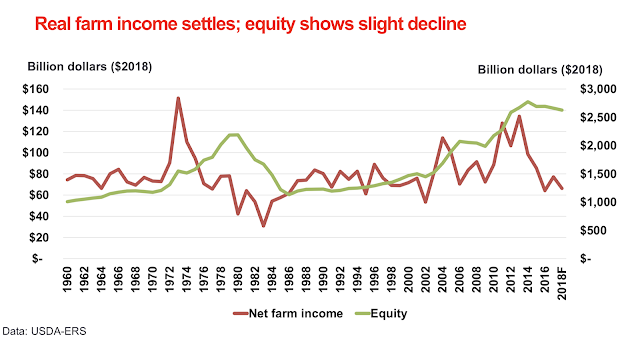 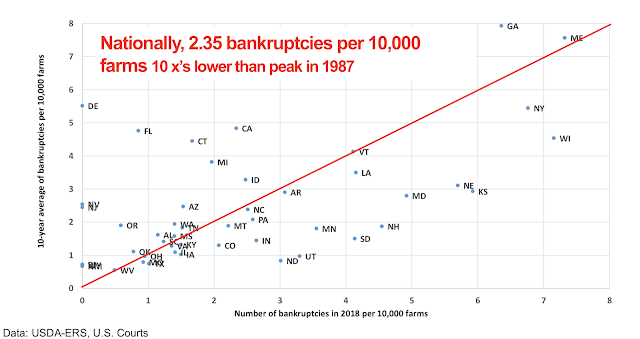 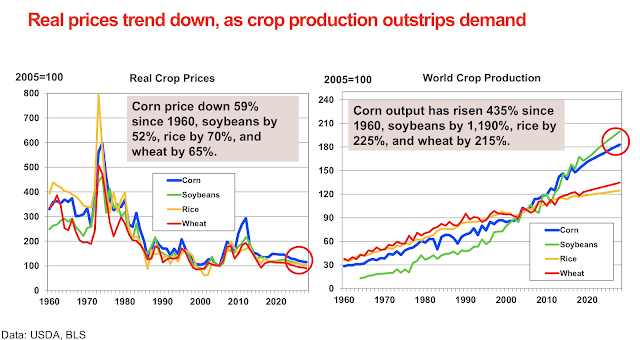 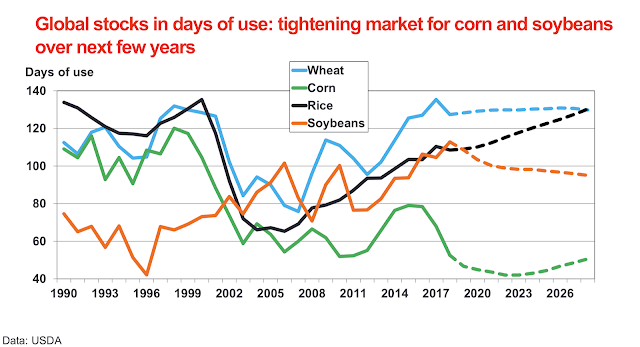 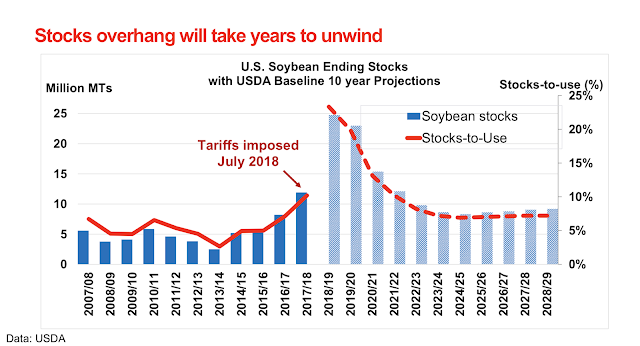 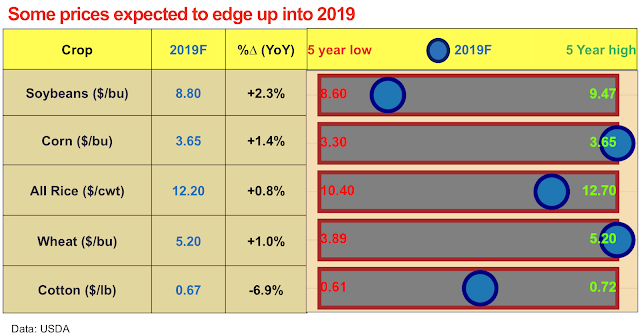 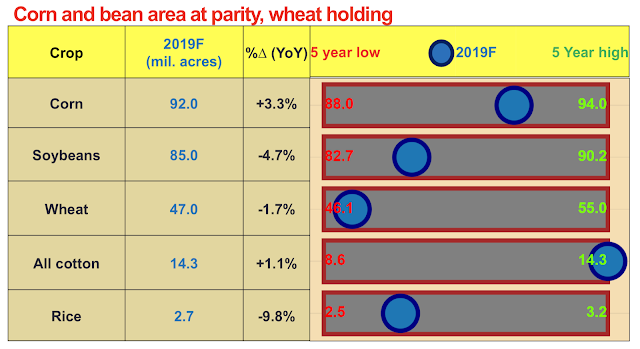 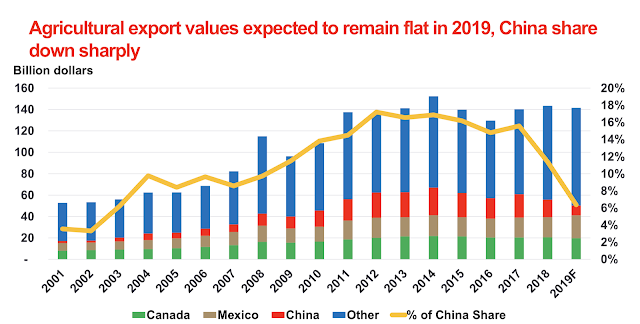 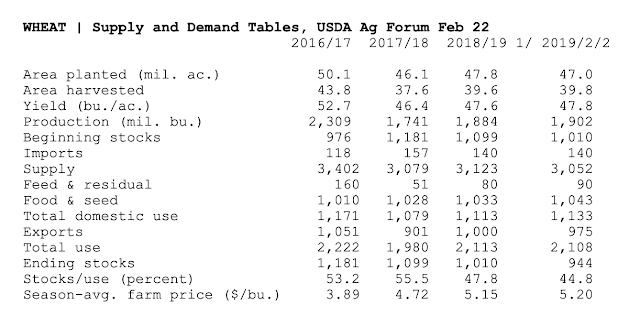 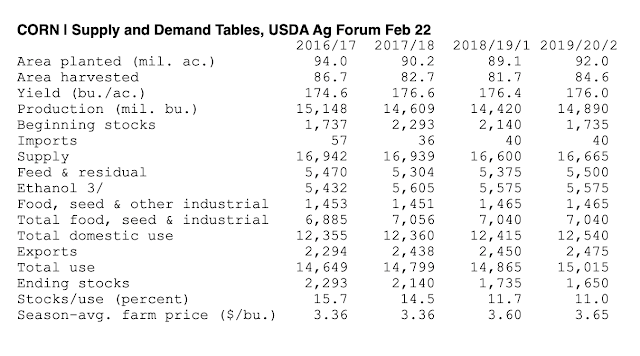 The number of acres of corn planted this spring will be a key factor in determining where the price of corn goes. University of Illinois Agricultural Economist Todd Hubbs took up the issue in this week’s farmdocDaily article.

He starts with a historical graph. It shows the principal crop acres in the United States and how those have changed since 1997. Both corn and soybean acreage have increased. Combined they’re up about 10 percent over the past two decades. 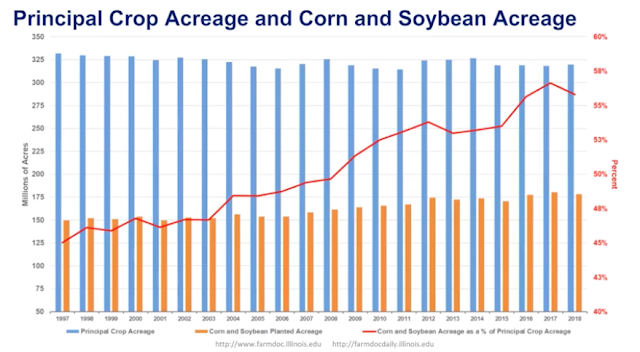 Illinois’ Todd Hubbs uses that history to help put the number or corn and soybeans acres into perspective, “When we look at the harvest month corn to soybean futures price ratio this year it has been about 2.37. There is a definite signal in this graph from about 2006 to 2018 that if you are above 2.4 in that ratio, there will be less corn acreage. If you are below 2.3 there will be more corn acreage. We are, today, sitting right in between those. We’ve seen problems with field work in large parts of the corn belt. We’ve seen fertilizer and other input costs go up on corn. So, the idea that we are going to see a massive increase in corn acreage could happen, but under the current price structure we might not see the kind of corn acreage we think we are going to see.” 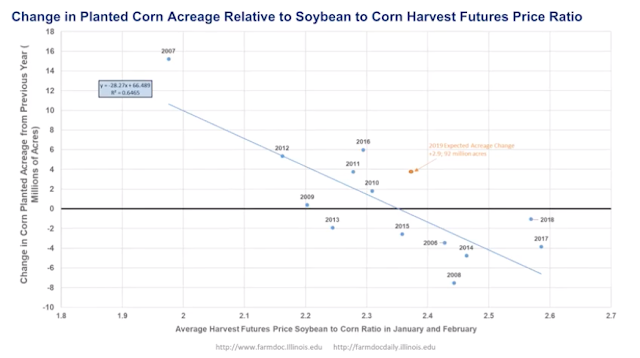 Hubbs says he used the 2019–20 futures prices to forward calculate a seasons average cash price for new crop corn. His calculation points to $3.81 per bushel. He then figured a stocks to use ratio that would fit that number, “I think an 11% stocks to use ratio in 2019–2020 would give us $3.81. If consumption is constant at 14.8 billion bushels from this marketing year to the next, that would put corn acreage around 91.7 million at a national trend line yield of 174.6 bushels to the acre.”

Finally, Hubbs says there isn’t a lot of weather premium priced into new crop corn futures. He also says there isn’t much of premium built in for a possible trade deal with China. Hubbs thinks that may be just as bullish for corn as it is for soybeans. Right now he thinks the 2.37 soybean/corn ratio feels high if the expectation is for a substantial increase in corn acreage.


Expected Corn versus Soybean Returns in 2019 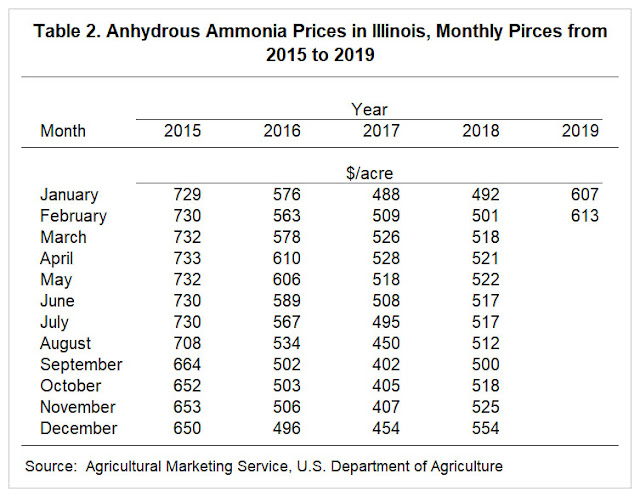 2019 Corn and Soybean Budgets
Table 3 shows 2019 corn and soybean budgets for high-productivity farmland in central Illinois (see farmdoc for 2019 Crop Budgets). These budgets incorporate price and cost changes between 2018 and 2019. Two notes about these budgets: 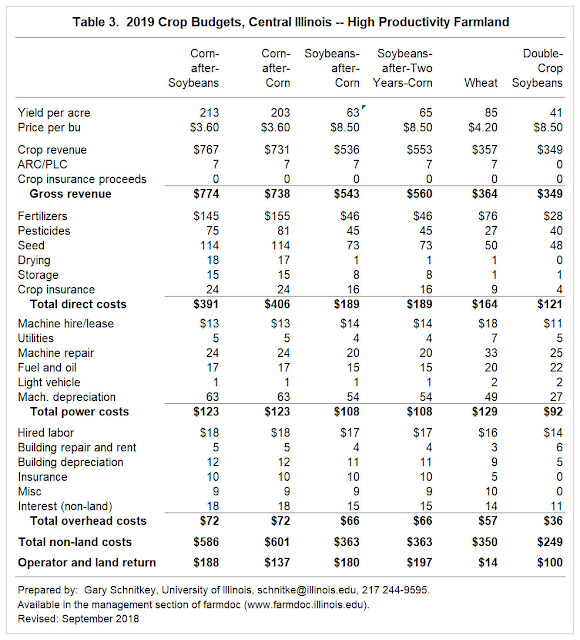 Other Budget Values Operator and land returns shown in Table 3 were recalculated for two different scenarios. First, a $9.00 soybean price was used to calculate soybean returns. The $9.00 price is close to fall bids. Given that corn prices do not change, operator and land returns for corn remain the same as those shown in Table 3:
while soybean returns increase to:
As would be expected, this price scenario increases soybean profitability relative to corn. Current forward bids do not suggest a shift to corn from a profitability standpoint.

The second scenario maintains the corn and soybean prices at $3.60 and $8.50, respectively, but increases corn yields by 20 bushels per acre and soybean yields by 6 bushels per acre. This scenario reflects a situation where budgets are more optimistic than trend yields due to high yields in recent years. In this case, operator and land returns are:
Higher yields increase returns and also increase the relative profitability of corn. However, corn-after-scorn is less profitable than soybeans-after-corn. These projections do not suggest that growing more corn would be more profitable than maintaining soybean acres given that both crops have above trend yields at 2013–2018 levels.

University of Illinois Agricultural Economist and noted ethanol industry specialist Scott Irwin wrote an article detailing the financial losses the industry experienced last year. Use the link above to read the full article. Here’s the paragraph Irwin penned on the potential implications for ethanol going forward.

“The ethanol industry in 2018 experienced its first losing year since 2012, thereby ending a run of five consecutive years of positive returns. The estimated loss for a representative Iowa ethanol plant in 2018 was -$2.2 million. While large, the 2018 loss was still far less than the -$6.7 million loss in 2012. The evidence points to overproduction as the driving force behind the low prices and financial losses experienced by ethanol producers during 2018. The fortunes of the U.S. ethanol industry are unlikely to improve until production and use are better balanced. This will require shuttering some production capacity, additional demand, or some combination of the two. The most optimistic scenario is additional demand for U.S. ethanol exports as part of a trade deal with China.” - Scott Irwin, University of Illinois
Read more
More posts