Showing posts from April, 2020
Show all

WHIP+: Farm Aid for Losses Due to Natural Disasters

The signup period for a program called WHIP+ (whip-plus) is open for farmers suffering losses because of natural disasters during the last two years.

WHIP+ is the continuation of a federal disaster aid program. Most farmers in the corn belt will recall it as the program used last year to bump up prevent plant payments by 15%. Congress introduced WHIP+ last summer, then during the December appropriations process, it dropped in an additional $1.5 billion dollars in funding and expanded qualifying crop losses to include losses due to excessive moisture and D3 and D4 drought.

Producers who suffered either of these types of losses in 2018 or 2019 can apply for WHIP+ assistance through a local Farm Service Agency (FSA) office today says University of Illinois Research Specialist Krista Swanson, "So, the program provides payments for yield losses but there are still a lot of unknowns. The signup period started March 23rd. However, FSA offices across the state do n…
Read more

Farmers and the Paycheck Protection Program

Congress has moved to allocate additional money to the Paycheck Protection Program and farmers could benefit.

Bob Rhea of the Illinois Farm Business Farm Management Association says some farmers should be able to apply for the government-backed SBA loans, “We believe farmers are eligible to participate in the PPP, the Paycheck Protection Program, under the CARES Act. They don’t specifically identify agriculture as a participating entity but in the very broad scope of things they say any eligible business with less than 500 employees is eligible to participate in the Paycheck Protection Program.”

PPP is administered through local banks and is available through Farm Credit offices. Bob Rhea says it is a loan but one that can be easily forgiven. Here’s how self-employed farmers and others would make the paycheck calculation, “It does include a very unique forgiveness provision for a Small Business Administration loan. It is really based on eight weeks out of 52. Approximately 15% of thei…
Read more

US Corn, Soybeans, and Wheat in World Perspective: Importance of the US Cropped Acre Constraint 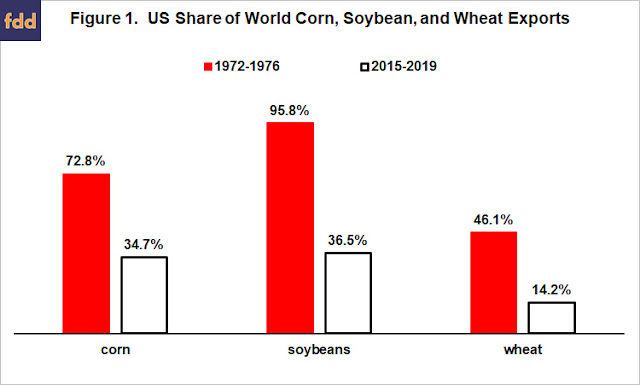 Wide-spread concern exists over the large decline in US share of world corn, soybean, and wheat exports (see Figure 1). Moreover, quantity of corn and wheat exports have never consistently exceeded their early 1980 levels (see Figure 2). Tariff wars have heightened the concern. Long term impact of the tariff wars is a concern, but this article argues that graphs such as Figures 1 and 2 exaggerate the decline in US agriculture’s international standing and mask key relationships that frame private and public decisions. Data cited in this article come from PSD (Production, Supply, and Demand website).

Reasons for Exaggeration Growth in domestic US use is ignored. US consumption of meat, livestock products, and especially biofuels has grown, displacing exports, everything else remaining the same. Zulauf estimates US corn exports are 1.4 billion …
Read more

Planting Corn and Soybeans in 2020 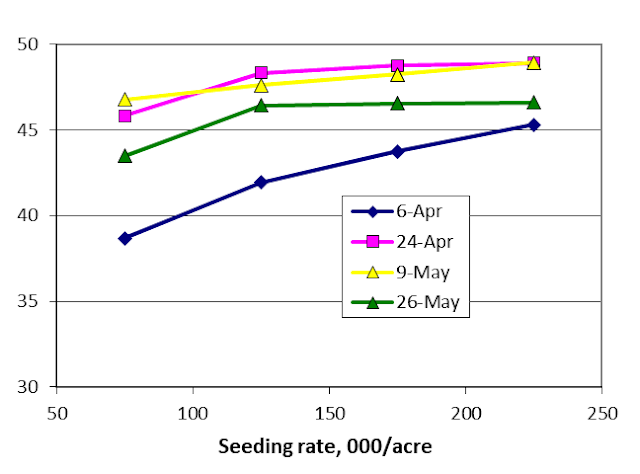 March rainfall in Illinois ranged from normal to a couple of inches above normal, but the last week of March and first week of April have been relatively dry, and field operations are getting underway. The April 6 NASS report indicates that there were 3.1 days suitable for fieldwork in Illinois during the week ending on April 5, but no planting was recorded. As is often the case in early April, soils are wet over most of the state.

The 4-inch soil temperatures at 10 AM have been close to 50 degrees in southern Illinois, and over the past week they have increased from the low 40s to the mid–40s in central and northern Illinois. The forecast is for a return to cooler weather later this week, and possibly to wetter conditions as well. Such “yo-yoing” is normal for April, and it often brings up questions about what to do when the weather forecast is for conditions to deteriorate as planting approaches. Do we plant or do we wait?

There is…
Read more
More posts