This week I took a group of farmers, landowners, and listeners on the second Follow the Corn bus trip. We went to New Orleans to see Zen Noh’s export terminal in August of 2012. This time was a bit less ambitious. Just a quick trip to see John Deere in Illinois and Iowa.

We loaded our appropriately colored green and yellow Cavallo motor coach about 3:30pm Monday afternoon. Our first stop was at one of my favorite haunts in Peoria, Avanti’s Italian Ristorante. It is simple, affordable cuisine and every one agreed that it hit the spot.  If you go there be sure to order a Gondola to take home. You’ll thank me later.

Peoria is about half way between Champaign and the Quad Cities. It was an easy ride to our hotel across from the John Deere Pavilion. We checked in, and I’m certain everyone had fun playing with the ‘Sleep Number’ beds at the Radisson. It’s the little things that make a trip memorable. I try to stack those up when planning the Follow the Corn events.

Our first John Deere plant stop was Harvester Works. This is where Deere makes combines. We arrived at 7:40am for our 8am tour. It gave us all plenty of time for an extra cup of coffee and to play on the S Series combine in the plant lobby. It’s kind of a farm kids dream! I got to play on a combine and look at the cool art work on the walls. Art work, by the way, is a theme at Deere. It is everywhere and in everything. I read the John Deere Way, the book – actually I listened to it using Audible - earlier this year and Deere believes equipment should be beautiful, themselves pieces of art. It is part of the John Deere culture.

There is something of an orchestrated dance that happens on John Deere’s manufacturing floors to bring their equipment to life.

Here’s a fun little fact we learned at Harvester Works. The average life of a John Deere combine is about 17 years. Over that time it will have five owners. One of our tour guides happened to help design John Deere’s paint system. It is extraordinary and cost tens of millions of dollars to build. He was a humble man, and a simple dedicated John Deere employee who came up with a good idea to make John Deere green more durable in the field. He, like every John Deere employee we met, was pulling towards a simple goal of making a quality product for farmers to use. They were very proud of their equipment, but mostly concerned about how it would stand up for their farmers.

Earlier, I told you it was the little things that make a trip memorable. We had some discussion during the planning process about the noon meal on Tuesday. John Deere would provide one for a fee at the headquarters. It wasn’t cheap, but I was pretty sure it would be quote “one of those memory builders”. In fact that was the case. 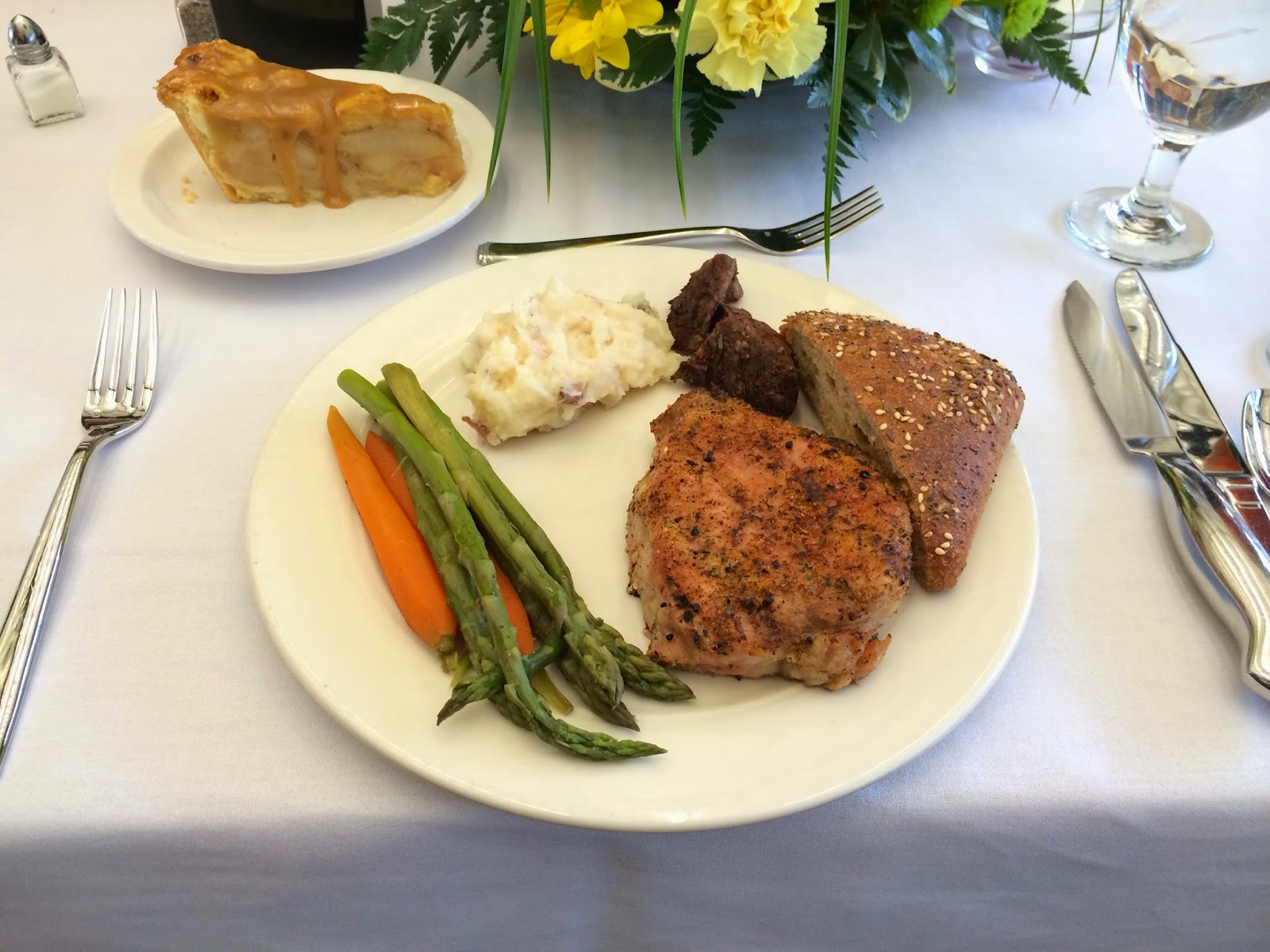 We dined at Deere. It was white tablecloth cuisine served to us as we sat on fifty-year-old teak wood chairs designed especially for the headquarters building at its construction.

The John Deere headquarters were built to attract talent from around the planet. It isn’t located in New York because the company believes it is tied to the land. It is rugged, yet exquisite. The curator of the vast art collection housed at John Deere headquarters rotates it from floor to floor so that over time all the 1300 employees working on the campus can view the entire collection. The headquarters is an architectural masterpiece perfectly fitted into a rolling landscape of wood and water and meadow. 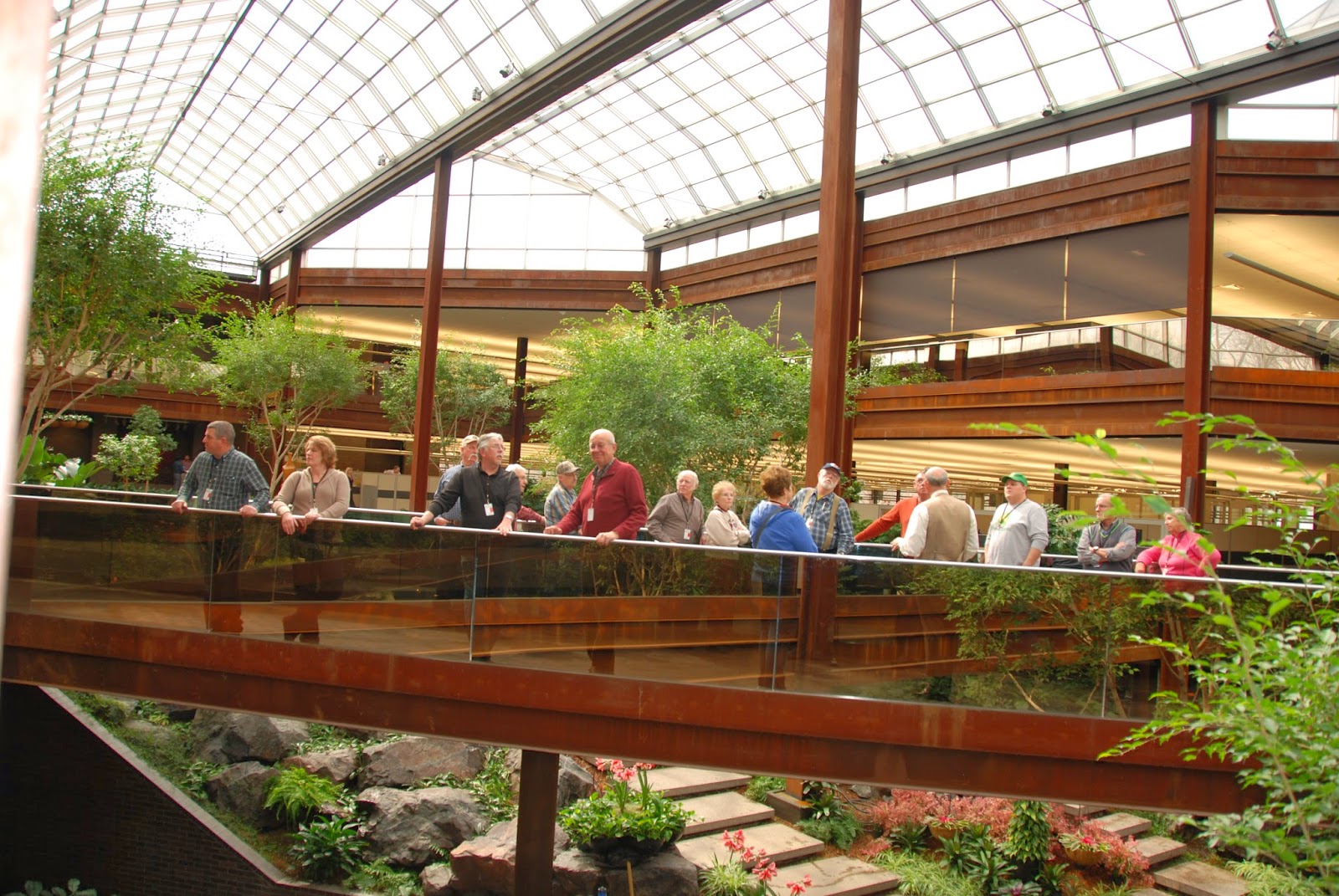 I was feeling pretty satisfied with myself and the Follow the Corn – John Deere tour after dinner. We were on time and things had gone very well. I’d even brought a few homemade cookies along for the ride. These were scrumptious and made by mom, that’s what I’ve always called my wife’s mother. The riders loved them. Things were good, but they were about to get much better.

Our third tour Tuesday was at John Deere Seeding Group. This is where Deere makes planters in the Quad Cities. It was a late edition added last Thursday. A University of Illinois alum at Deere arranged it so we could see the new ExactEmerge planter, or at least one of the units.

We arrived to find two very happy tour guides. They stayed just for us. They weren’t supposed to be there. This was my first happy surprise. I didn’t expect a tour of the planter manufacturing floor. More on it in a moment. We had come, however, to the Seeding Group to see Deere’s new 10 mile per hour planter. They brought in a unit, took it a part, let us handle it, showed us how it worked, and then took our questions. The farmers challenged them, pushed them, and listened to them explain why the new way to plant corn and other crops would work not only faster, but more accurately. I think we all, mostly, believed them. 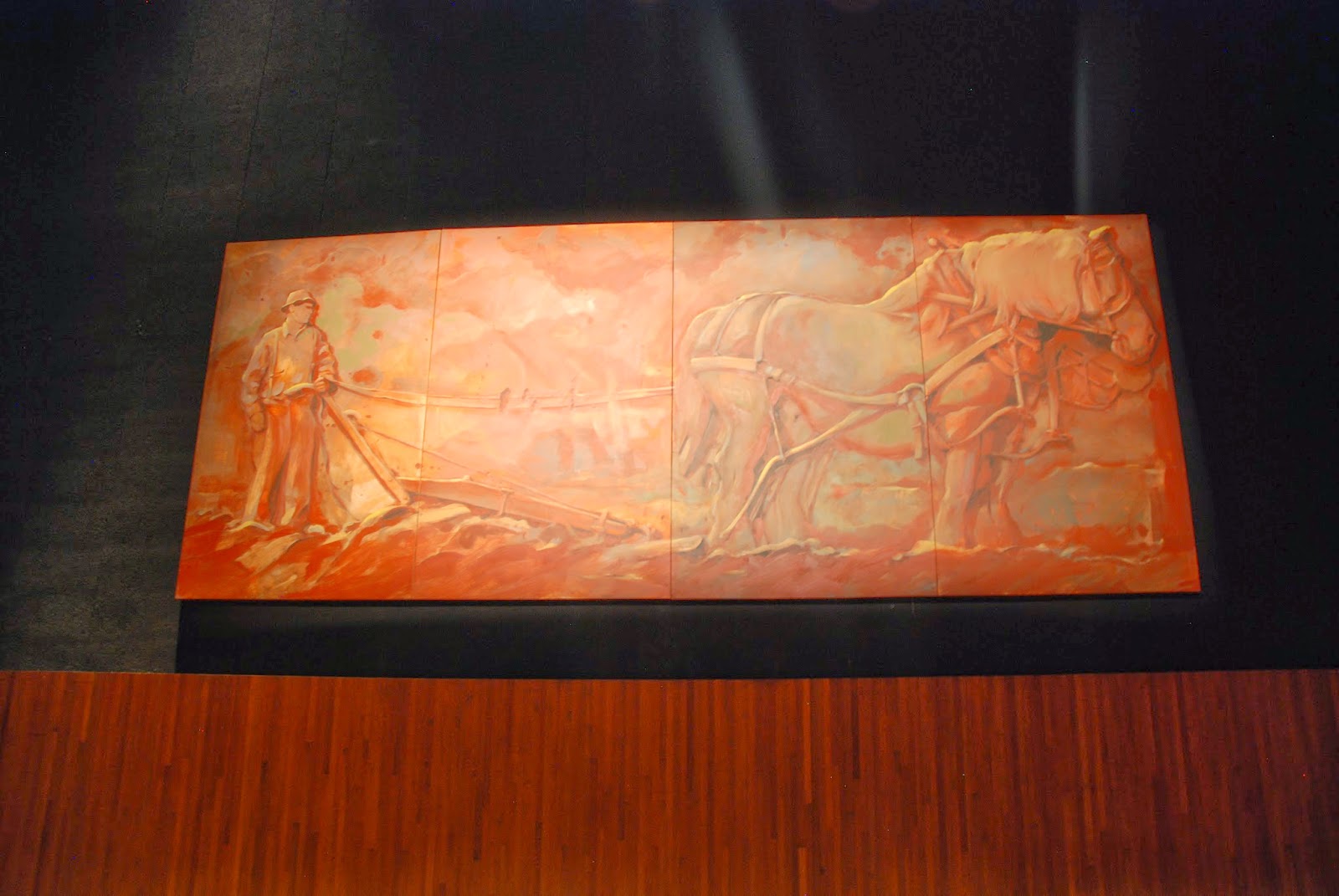 The men and women working the floor at the Seeding Group were on a dead run to make planters. Our tour guide, he was named Loren, asked a couple of times if we were in a hurry. “No”, came our answer. So, he took time to walk us through the plant. We stopped and gaped at the laser used to cut parts from sheets of metal. These came out of the machine smooth and flat. Some of them were handed off to men and women to be bent and pressed. Buck, though he was busy, stopped – and as he did somebody stepped up to his machine – to tell us how much he liked bending parts. He'd been doing it for 17 years. I think he told us his father and grandfather had done it, too. He was proud of Deere and glad to meet farmers that very well might be using a planter he helped to build.

Even the guys who ran red, were thinking about running green when we left the Seeding Group. We loaded the bus and headed for Waterloo, Iowa.

Frankly, the Tractor Cab Assembly Operations tour seemed a little rushed. I think this is because we were – at least at first – just another group of the some 20,000 that come through the plant annually. A little nudge and a request to have some one-on-one time changed the tempo. Deere provided our little entourage with four folks “in-the-know”. They were all fairly young and it was fun to watch the farmers give them a lesson on John Deere failures, successes, and even hopes. This is the plant were I was finally convinced John Deere actually builds each piece of machinery for an individual farmer. It is a line often repeated by John Deere employees. There are more than 8000 different versions of a single line of the R Series tractors. It is possible to build the tractor all year, and not build the same tractor twice. It’s a small thing, but rather nice to know when you spend so much money that no one else is likely to have exactly the same tractor. 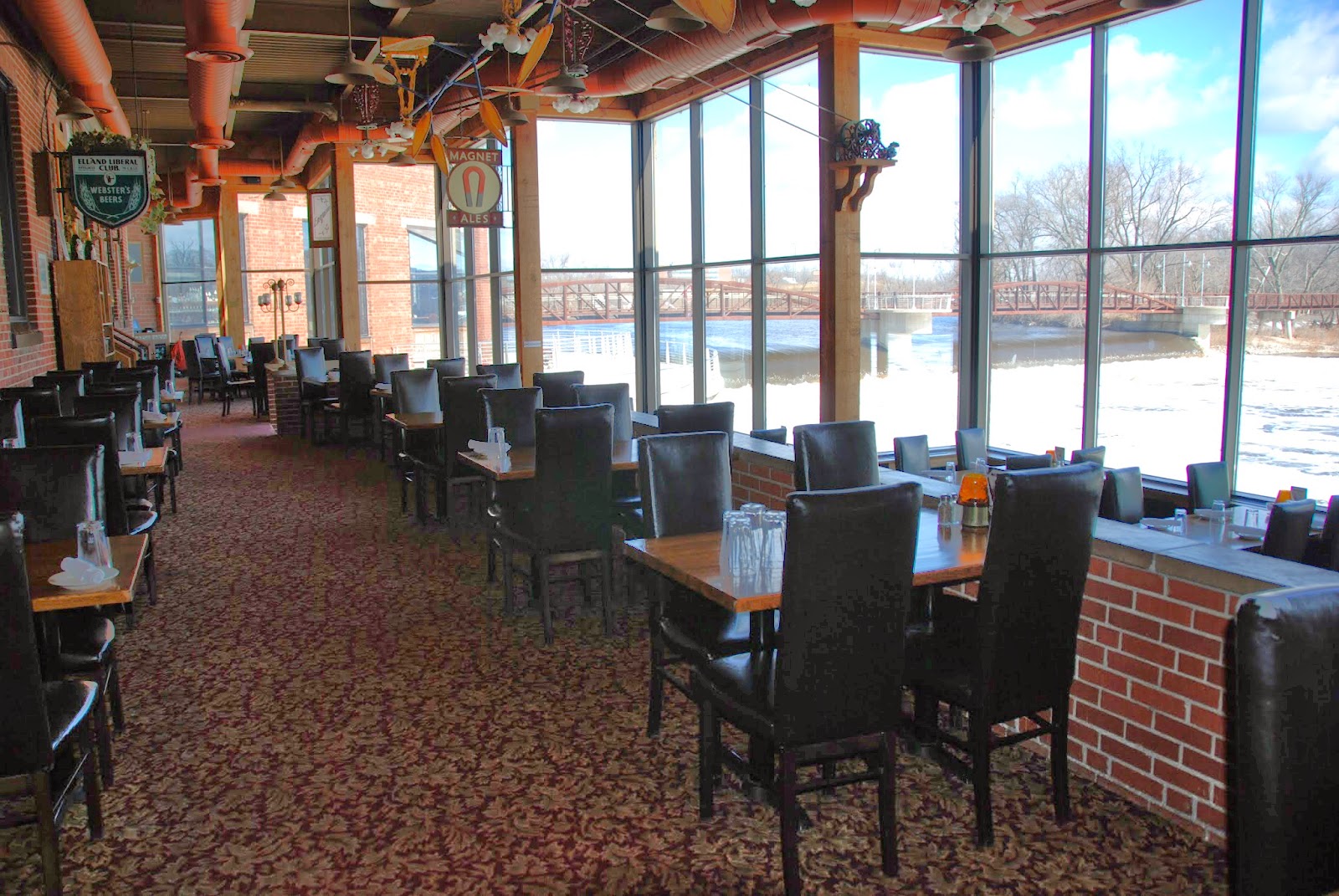 Our last stop, before heading home, was in Coralville for lunch. The Iowa River Power Restaurant opens to the largest dam in the state. The owners converted a former electrical power generation plant into a fascinating place to eat. The glass façade opens to the Iowa River and inside there are 30 ton lifts and the iron to support them towering above the dining room. The food is good, too. We arrived home at 4:30pm just as advertised on the itinerary.

Afterwards, I almost called the cemetery in Logan County to sell my plots.