May 20, 2018
University of Illinois Extension | WILLAg.org

Farmers should be on the lookout for black cutworm in their corn fields.

The earliest projected cutting dates were late last week in Montgomery County. University of Illinois Extension Entomologist Nick Seiter says fields, especially at risk to having plants cut by the black cutworm, include those with later planted corn and those sown into grassy weeds or a late terminated cover crop. Seiter explains, “What you are going to want to do is to scout your field. Look for plants lying on the ground that appears to have been cut with scissors. This is different looking than damage from a bird digging up the plant looking for the seed. These corn plants will be cut off. When you start finding that, scrape around in the residue looking for the larvae. The black cutworm larva is dark colored, with a greasy appearance. It is not slimy, but it looks like it has been coated with Crisco. If you find the worms and about three percent of the plants have been cut throughout the field it is the time to initiate a treatment.”

Seiter says there are several pyrethroid insecticides that can be successfully used as a rescue treatment. He offers these black cutworm management pain on the University of Illinois the Bulletin website.
Kelly Estes at the Illinois Natural History Survey coordinates an insect trapping network throughout the state and those results, including the black cutworm cutting dates, are posted online at The Bulletin website - that’s bulletin.ipm.illinois.edu and on Twitter using the handles @ILPestBulletin or @ILPestSurvey.

Let’s cut to the chase. There have been no trade deals announced. However, trade tensions with China have eased. NAFTA issues remain unresolved, and some in the Trump Administration say it may have to wait until next year.

Here’s a selection of quotes from the Sunday Morning News shows. Thanks to Kieth Good from farmpolicynews.illinois.edu & @farmpolicy for curating the list.

NEC Dir. Larry Kudlow tells @gstephanopoulos following trade talks with China: "There's no agreement for a deal, we never anticipated one, there's a communique between the two great countries. That's all." #ThisWeek pic.twitter.com/oj6goENJFA
— This Week (@ThisWeekABC) May 20, 2018

"Are we going to get everything? I don't know. But I will say this, we're making terrific progress."

Mnuchin on $200 billion China-deal figure: "Chris, we have specific targets. I am not going to publicly disclose what they are. They go industry by industry" pic.twitter.com/cO8Js0e31l
— Trade News Analysis (@TradeNewsCentre) May 20, 2018

In an exclusive interview, @stevenmnuchin1 tells Chris: "We're putting the trade war on hold, so right now we have agreed to put the tariffs on hold while we try to execute the framework." pic.twitter.com/fJXKozKxK5
— FoxNewsSunday (@FoxNewsSunday) May 20, 2018

Treasury Secretary Steven Mnuchin says efforts to renegotiate a trade agreement with Canada and Mexico could spill into next year: https://t.co/kM3JdClgGr
— AP Politics (@AP_Politics) May 20, 2018

Each Monday during the growing season USDA releases a Weekly Crop Progress and Conditions Report. In the early 1990’s I began calling statisticians in the three “I” states to record audio commentary from them individually. The idea was to provide a more granular look at how corn and soybeans were fairing in Iowa, Illinois, and Indiana. The audio releases have continued ever since, but now USDA posts them to the state NASS websites. Not every state produces an audio version of the report, but four of the five top corn-producing states in the nation do. Each Tuesday afternoon they are aired during the WILLAg.org Closing Market Report. More often than not there is a tidbit in them that gives you something to really consider. For instance, in last week’s release, the Iowa audio report detailed the lag in the north-central part of the state. Do take a listen, and then tune each Tuesday to hear more from USDA. The reports are compiled as of each Sunday, released at 3pm each Monday, and aired on WILLAg.org each Tuesday.

USDA’s May 13, 2018, Weekly Crop Progress report showed 62% of the nation’s corn crop has been planted, just 1 percentage point behind last year. 28% of the corn has emerged. 35% of the soybean crop has been sown nine-points ahead of the average. 10% of soybeans have emerged. 45% of winter wheat has headed. Just 36% is in good to excellent condition. Last year that combined number was 51%. Here are the reports from Iowa, Illinois, Minnesota, and Indiana.


Market Outlook for Corn and Soybeans


Farmers, as we enter the last half of May, are nearing the end of the spring planting season and they are turning their attention again to the marketplace. Todd Gleason has more on how one agricultural economist sees prices playing out for the year.

We’ll start with the last numbers USDA publishes in the Supply and Demand tables for each commodity, the season’s average price. For corn, that number - at the midpoint - is $3.80. University of Illinois Agricultural Economist Todd Hubbs is a bit more optimistic. He has it at $4.05. His soybean price, however, is less than USDA’s. The agency has it at $10.00 a bushel. Hubbs puts it at $9.45. The difference in viewpoint says Hubbs lands squarely on soybean exports, “When we look forward to 18/19 the 2.29 billion bushel USDA projection seems a bit high especially when you consider the size of the Brazilian soybean crop and China’s aspiration to increase domestic soybean production while cutting back on imports for the first time in over a decade. It is unclear if China can pull this off, but I’ve got exports at 2.20 billion bushels in 18/19 and that may be generous considering whats going on currently in the market.” 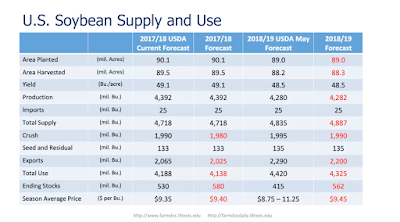 So, Todd Hubbs soybean export figure is 90 million bushels lower than USDA’s for the coming marketing season. It’s lower for the current marketing year, too. All-in-all his soybean supply & demand table puts the new crop ending stocks at 562 million bushels. That’s a far cry from the much more optimistic USDA 415 million bushels projection and the reason his price projection is 55 cents a bushel lower than USDA’s. Again USDA is $10.00, Hubbs is at $9.45. His corn number swings in the opposite direction.

USDA, in the May reports, projected the price of new crop corn at $3.80. Hubbs is at $4.05. The reason why is pretty simple. Hubbs says he uses a lower yield trend line yield, "The main difference between my projections and USDA is the trend yield number. We sit at 171.4 whereas USDA has it at 174 bushels to the acre and the final yield makes a big difference in the consumption pattern and the final price. 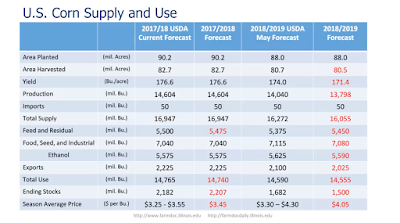 Again, USDA is at 174 bushels to the acre and Todd Hubbs is using 171.4. Both numbers are calculated from the same USDA yield data set. USDA uses a smaller subset starting at about the time Bt corn was introduced. Hubbs’ set goes back a couple more decades, and consequently, his yield number is lower. The resulting price difference in the supply & demand tables for new crop corn is $3.80 for USDA and $4.05 for Hubbs.

Friday, May 18, 2018, the United States House of Representatives voted on and failed to pass legislation to create the 2018 version of the Farm Bill. Fourteen members of the Republican Party’s Freedom Caucus, 16 moderate Republicans, and the Democrats cast no votes. It sets up a complex path forward for the bill.