It looks like this year is going to be better than last year for farmers in central Illinois. Todd Gleason explores how gross income has changed for row croppers in the middle of the prairie state.

The gross revenue for corn is $292 per acre. It is tallied from three income sources. The crop is worth $262. There was a $20 farm safety net payment from the ARC-County program and a $10 crop insurance indemnity. The total, again $292, is lower than last year says University of Illinois Agricultural Economist Gary Schnitkey, “Even though we are putting in a very high yield, we are using 231 bushels to the acre for the corn average - the same as in 2014, revenues will be down for corn in 2016 as compared to 2015”. 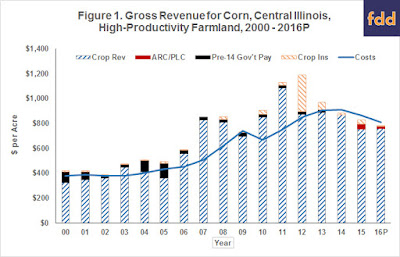 Schnitkey calculated the gross revenue figures for the farmdocdaily website.

The soybean figures add up in a similar fashion. The gross revenue is estimated to total $718 per acre. It’s a figure much higher than the 2015 gross says the agricultural economist, “We are including very high soybean yields for 2016. Record-breaking yields, in fact, of 73 bushels to the acre. The price is above $9.50, and this may actually turn out to be low as prices continue to climb. Overall, revenue on soybeans will be up from last year and much higher than total costs. So, our bright spot for the 2016 year will be revenue and income from soybeans”. 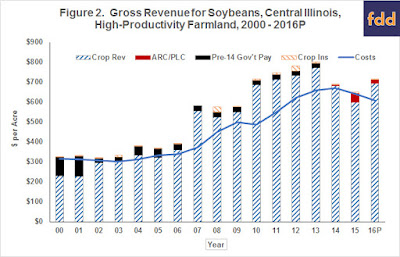 All in all, on the highly productive soils of central Illinois, 2016 will go down as a high-yield low-income year. Another year in which farmers just-get-by says Gary Schnitkey.


Quote Summary - Get-by year, but better than it could have been without the high yields. Most farmers will maintain equity, but may see some working capital declines. The declines will be more pronounced on farms working a higher percentage of cash rented land. It is better than 2015, but still not up to sustainable levels for the long-run. We need to see higher returns, particularly for corn prices in the future.