Urbana, Illinois - Wednesday morning September 7, 2016 University of Illinois Extension Agricultural Economist Gary Schnitkey presented a webinar looking forward into 2017. The discussion centered on farm profitability, projected income, and cash rents. You may the watch the webinar. What follows is a summary of the hour long content. 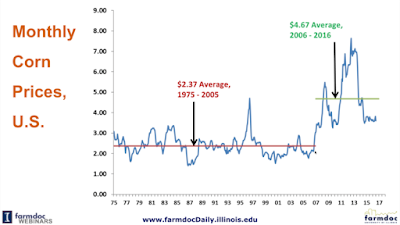 The USDA WASDE monthly average corn price is $4.67 from 2006 to 2016. The price of corn has been below this average since the fall of 2013 & Gary Schnitkey believes it is likely to continue to stay below this average through the 2017/18 crop year.

Each year USDA tracks the average marketing year cash price. This price is updated monthly in the World Agricultural Supply and Demand Estimates report. The average cash price for corn from 1975 to 2005 is $2.33, $5.95 for soybeans. This is a long term national average cash price. The USDA projected estimates for this marketing year (2016/17) are currently $3.15 and $9.10. The USDA estimate for the 2015 crops is $3.60 and $9.05. This last set can be used to compute expected ARC County payments to be delivered this fall. 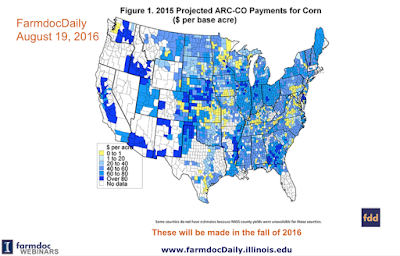 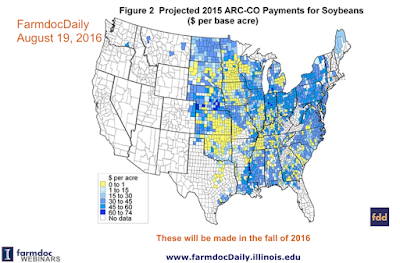 Here is a [link](http://farmdoc.illinois.edu/fasttools/index.asp) to the FarmDoc Fast Tools web page from which you may download an Excel spreadsheet to project ARC & PLC payments.

The following tables detail gross revenue per acre for highly productive central Illinois farmland. These are actual, as derived from the Illinois Farm Business Farm Management records, and projected revenues. 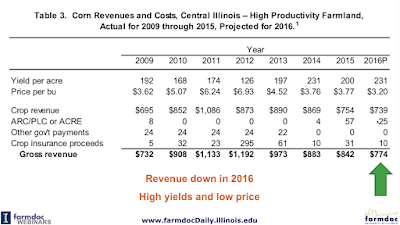 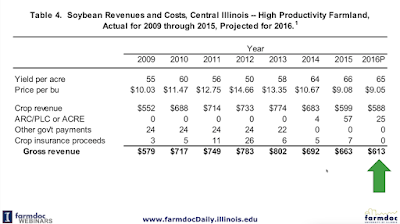 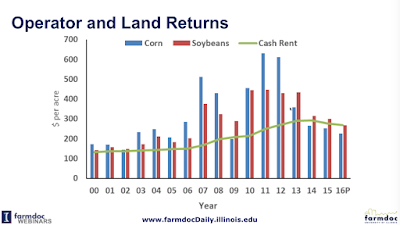 Operator and land returns have been declining for both corn and soybeans for several years. However, returns from soybeans have been out performing corn since 2013. Schnitkey predicts this will continue through 2017. It would be the fifth year of higher returns for soybeans than corn. Raising corn on cash rented farmland has been a loser since 2014.

Total income on all Illinois corn and soybean farm (all types of owned & cash rented combined) for 2016 projects a breakeven income year. 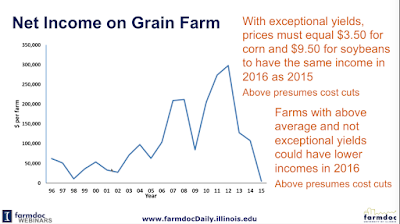 Schnitkey says farmers will face three key decision making factors as they consider cash renting farmland for 2017, and that it might be better to give up some of the land based on these considerations. 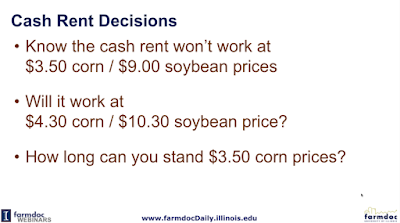 Across the board the University of Illinois agricultural economist says farmers might need to rethink crop rotations. Soybeans have proved better for several years, and it may be time to adjust to this reality. This or it needs to get cheaper to plant corn. Back in 2000 it costs $63 less to sow and harvest an acre of soybeans. This year the difference was more than $200 an acre of non-land costs in favor of soybeans over corn. 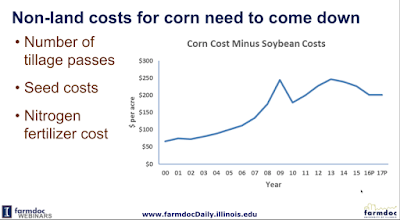 Last week the professional farm managers in Illinois suggested they'd be lowering cash rents by about $20 next year (ISPFMRA Survey). Gary Schnitkey's number is a more conservative $17 an acre based on the fact not all land is professionally managed. Neither of these would be enough to make a cash rented farm break even given $3.50 corn and $9.00 soybeans (2017 | by expected corn yield across Illinois). 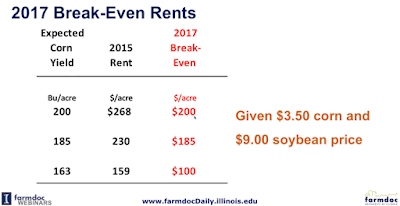 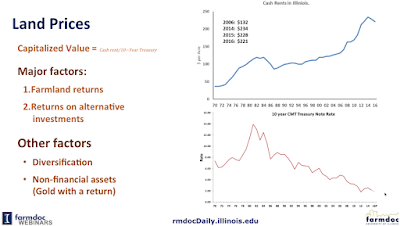 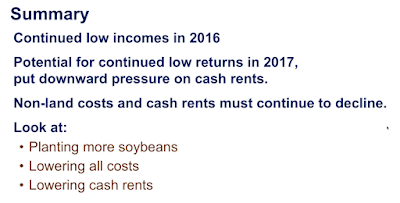 Each Tuesday Gary Schnitkey posts a new article to the FarmDocDaily website. Periodically he and the other agricultural economist at the University of Illinois hosts webinars. You may register for upcoming webinars and watch those that have already concluded on this page.