Showing posts with the label entomology
Show all

URBANA, IL – Crop Sciences at the University of Illinois is growing, with two new research assistant professors joining the department this fall. The two faculty members, a row crop entomologist and a plant pathologist, will be working directly with growers to address crop production issues across the state. The new entomologist, Nick Seiter, visited the Urbana campus this week.

“These two positions represent our connection with growers and stakeholders,” said Germán Bollero, department head for crop sciences. “We have researchers working on plant pests, but Nick will be our front door with the growers, really taking the pulse of what’s happening out there. He will do the translational work. I’m very excited for him to come.”

In an interview on Tuesday, Seiter discussed his background and his plans for the new position. 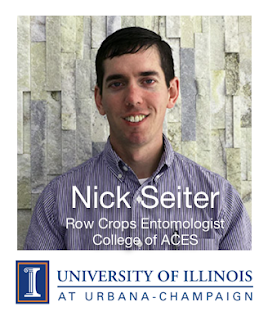 ACES Marketing and Communications: Tell us a little about your background.

Seiter: I’m from southeast Indiana originally. I did a bachelor’s and a master’s in entomology at Purdue, working on row crop insects and specifically on the western corn rootworm for my master’s. I went to Clemson University in South Carolina to do a Ph.D. starting in 2011. I developed preliminary management practices for the kudzu bug, which was a new invasive species in soybeans. In 2014, I took a position at the University of Arkansas as an extension entomologist working on various insect pests in cotton, soybeans, sorghum, corn, and occasionally in rice.

ACES: What got you interested in row crop entomology in the first place?

Seiter: I’ve always been interested in science and always liked being outdoors more than in the lab, so agriculture was a good melding of those interests. I started working in row crop entomology as a summer job. I enjoyed it and kept going from there.

Seiter: The fact that it is closer to home is one great reason for me to come here, but also the ag industry here is booming. Illinois is a great place to work in agriculture. It sounds like there’s a tremendous need here since they haven’t had an applied entomologist in this position for a while. It’s an opportunity to build a program and to do some impactful work, I hope.

ACES: Do you have specific projects in mind yet?

Seiter: I think there will be a lot of need to work with western corn rootworm, but western bean cutworm is another one that’s emerging. I think there will be some opportunity to work on that, as well as some of the soybean defoliators, stink bugs, and other pests that come up on a recurring basis.
I like to choose projects based on need, taking a problem-solving approach. That’s what motivates me in my work, that problem-solving aspect. It’s why I’ve worked in applied research throughout my career.

ACES: What are you looking forward to most?

Seiter: I’m looking forward to meeting the other people working in this area, meeting my clientele, and hitting the ground running.

Seiter will seek funding from industry, regional commodity groups, and the USDA to pursue his research plans. He officially joins the department on September 16, 2017. Can’t wait that long? Follow him on Twitter @nick_seiter and stay in touch with the Department of Crop Sciences and the College of ACES to hear about more visits in advance of his start date.
Read more

The black cutworm may do damage in central and northern Illinois corn fields over the Memorial Day weekend. Farmers should begin scouting soon because not all Bt corn hybrids offer adequate protection.

University of Illinois entomologist are estimating, based on black cutworm moth flights, that farmers might find the overnight work of the moth’s larval stage offspring beginning in late May. The larvae can cut a corn plant off. Farmers should scout for early feeding damage this week and next says University of Illinois Extension Entomologist Mike Gray.

Quote Summary - Growers should look for early signs of black cutworm activity. There will be small pin hole sized areas on leaves. These have been removed by very small caterpillars in the one to three instar stage. Once the caterpillars reach the fourth larval instar stage they can begin to cut plants.

Based on some heat unit calculations U of I entomologists project cutting dates will begin in Ford County (May 24), Mercer County (May 25), Lee County (May 31), Whiteside County (June 1), and Henry County (June 3) Illinois. Plants in the one to four leaf stage are most susceptible to cutting. It is important to note that not all Bt corn hybrids adequately protect against the black cutworm.